My Life As A Pole Dancing Extra On Law And Order: SVU

New Yorkers are not a homogenous bunch—we can argue all day about bagels, bike lanes, or neighborhood boundaries. But if I had to guess at one thing a majority of us have in common, it is an abiding love for everything Law & Order. After 20 seasons of the original, 14 of SVU and 10 of Criminal Intent, I’m guessing plenty of us have wound up in the background somehow.

But I'm also guessing that not too many have pole danced on SVU.

I got my chance last month, when my pole dancing studio (yes, studio. Not strip club.) posted a Facebook update straight from Central Casting: “Central Casting is seeking NON UNION REAL pole dancers, men and women, all ethnicities to portray students in a pole dancing class. . .You must know how to work a pole.” The email made it clear this was for SVU, and I flipped out, emailing photos of myself and waking my boyfriend up at 1 a.m. when I got home that night to take even more photos of me on my pole to send in. Plenty of better dancers from my studio were applying, so I reminded myself that I had no chance—but I had to try.

And lo and behold, they asked me to bring two outfits, my passport, and 6.5 inch heels. I checked in with the production folks at a studio in the no-mans land between Port Authority and the Javits Center, and waited at a table for the rest of the dancers to show up. As expected, they far surpassed my talent level. One was a go-go dancer in New Jersey. A few were instructors. One recently won the 2012 US Pole Dancing Championships. I felt like a fraud, but attempted to talk shop with the rest of them while wardrobe checked our outfits.

Lunch was served, and the non-union folks got to watch SAG members get dibs on the incredible spread. Seared scallops, carving station, hot mashed potatoes, three pies. The whipped cream for the fresh fruit was gone by the time the non-union cast got to eat, but we made do. We got a lot of stares since we were told to change into our costumes, mine consisting of blue booty shorts and magenta legwarmers. A stage mom gave me the stinkeye as her son got up to refill his lemonade.

After two hours of lamenting the lack of WiFi in the holding room, showing each other pole pictures, and taking guesses as to what the plot of the episode would be, we were picked up and brought to the makeshift pole studio. “Pole-er-Size” was emblazoned in purple bubble letters above a fake desk, with prop class schedules listing “Erotic Cool Down” taught by Wendy at 8:15 on Thursdays. The poles were thin and too close together, and weren’t bolted down, causing a few of them to move off center when we did tricks. “Don’t do anything too crazy, or they’ll come off,” the PAs said, not realizing the moves we were practicing were far from crazy.

We lounged upstairs while they set up cameras, gave the actress playing our instructor her mark, and got Ice T into the building. From a balcony we shouted that he should get on the pole. He shook his head, and did not look amused. Later, he would say “there is something really wrong with this” while watching us spin. I know it was his character’s line, but I couldn’t help thinking that he was a bit too convincing. 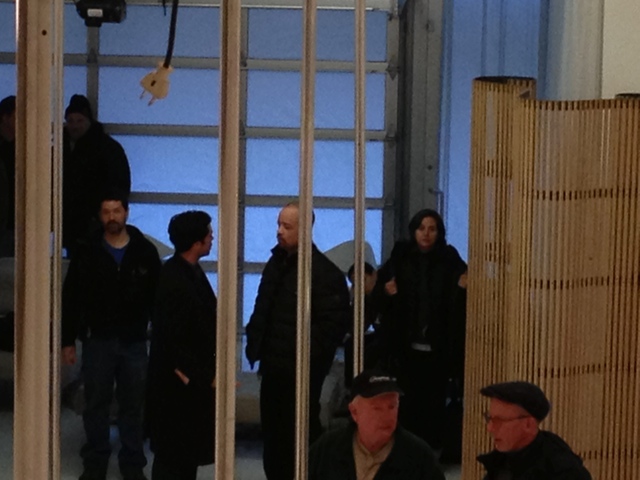 Then came another few hours of lounging upstairs, all the girls in our shorts and bra tops, texting or stretching or peering down at the set. It felt like being in a harem; we were banished and shushed until it came time to trot us downstairs. It also became very clear that SVU did not spring for a Pole Consultant (a profession I just made up) for this shoot. Not only were the poles too close together and the instructor’s line confusing, but they filmed the easy scene first. That means that we did simple spins while we were all rested and fed, and then hours later after some cheese and crackers and coffee, we were to don our heels, climb the pole, and do tricks until Detective Munch was done threatening somebody. After 10 takes of that, some of us were ready to fall down.

I’m not sure if all extras feel this way, but we felt like celebrities that day, with everything that entails. We were regarded with equal parts awe and side-eye, with every “Oh my god, you guys are amazing!” met with an “I gotta get me one of these in my basement” wisecrack from a goateed tech. Our climbs and inversions inspiring the girls to ask us where they can learn, and the guys to snarkily comment on our shoes and tell us it’s probably not that hard. Quite a few men on set dared each other to do spins or lifts. Danny Pino was the only one able to climb to the top. 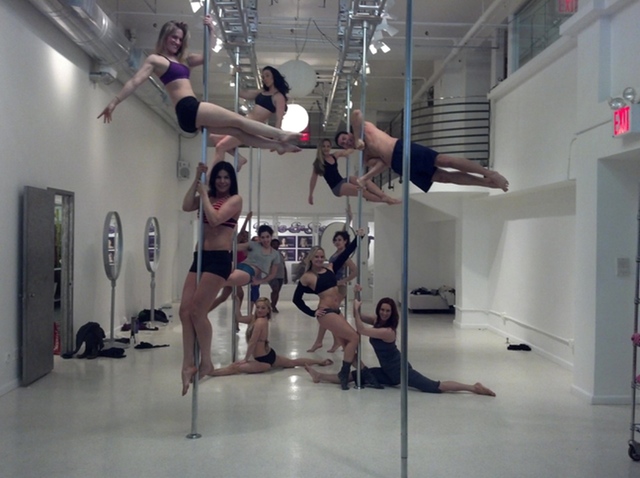 A month and a half later, my friends and I gathered around my TV, remote in hand to pause for the smallest glimpse of me in the corner. And at 7:58 mark or so, there I was (you can see the full episode here): a full, clear shot of me spinning in my leg warmers as Ice-T and Kelli Giddish interviewed the studio owner who turned out to be a pimp (?). But sadly, for all my work climbing and inverting in my heels, I was cut out of the second scene.

What surrounded my two-and-change seconds of glory was the most confusing episode of Law & Order I have ever seen. There were false rape accusations, long-lost children who are also drug dealers, a sting operation that was most definitely entrapment, and Dean Winters as the Beeper King an honest cop with nothing left to lose, or something. It did not help that one of the Allstate Mayhem ads played right after his emotional breakdown in the courthouse bathroom.

I doubt anyone will recognize me; the fans of that show are too busy yelling on Facebook about Christopher Meloni’s continued absence. But I can know that in some small way, I contributed to the cultural history of New York. I lived a dream. I was in my underwear on NBC.

Though I can still shame them for saying the studio was in the East Village (around 7:10) and then giving the address on screen as 224 East 43rd Street. 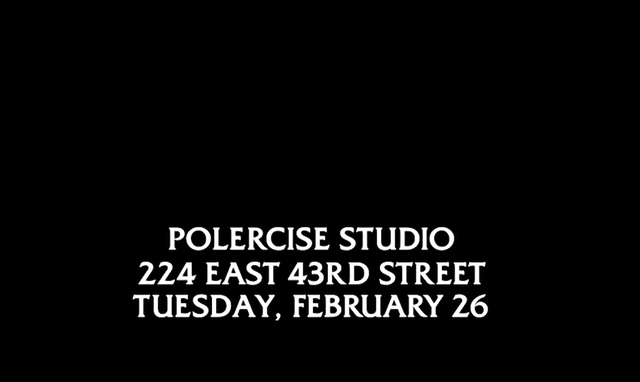 Jaya Saxena is a former Gothamist staffer and current freelance writer in NYC. She has a weird thing for Qream, and still doesn't know how to use Twitter. Here's more information on submitting freelance pitches to Gothamist.

#ice t
#law and order
#law and order: svu svu
#pole dancing
#longform
#original
Do you know the scoop? Comment below or Send us a Tip