My Cruelty-Free Evening With David Duchovny It began with a touching tribute to bedtime stories and ended with an anecdote about having sex with an 8-months pregnant woman. It's a fitting circle-of-life story for David Duchovny, who at 54 still bears the impish grin of the man who charmed a legion of weirdos on the X-Files over two decades ago. Last night he paid a visit to the Upper West Side location of gourmet vegan restaurant Candle Cafe West, which was filled with a 70-30 blend of eccentric Upper West Side sexagenarians and pink-haired groupies. We were all there for one purpose: to meet the man behind the FBI badge.

Though it's officially making a comeback (praise be), X-Files wasn't the theme of the evening—though guests I spoke to all dropped the alien conspiracy mega hit as their indoctrination point into Duchovny. The raison d'etre for the event was actually to promote Holy Cow, the book Duchovny published earlier this year about a lolspeaking cow who defects to India after discovering industrial farming. There's also a pig who converts to Judaism and a turkey who wants to move to Turkey.

Nobody I spoke with had actually read the book—which NPR fantastically panned as "nonsensical and deeply ridiculous...[a] bizarre disaster of a book"—but Duchovny helpfully treated guests to a dramatic reading from the ending. That's where he made the allusion to bedtime stories, pointing out his mother in the audience and quipping "now I'm reading to her." I can't say with complete certainty, but I'm betting the polite laughter and fixed grins had more to do with Duchovny's inherent charm than the jumbled text coming out of his mouth.

And as a deeply devoted X-Files fan—turns out getting masking tape off a window pane isn't easy!—I was right there with them. They say you should never meet your idols, but since I am literally this person I couldn't turn down an opportunity to share breathing room with Fox Mulder. Dressed in a burnt orange t-shirt touting "Seitan," Duchovny isn't the smoldering heartthrob from 20 years ago; his chiseled chin and distinctive nose bolster a softer face. He's a DILF now—and there's nothing wrong with that. 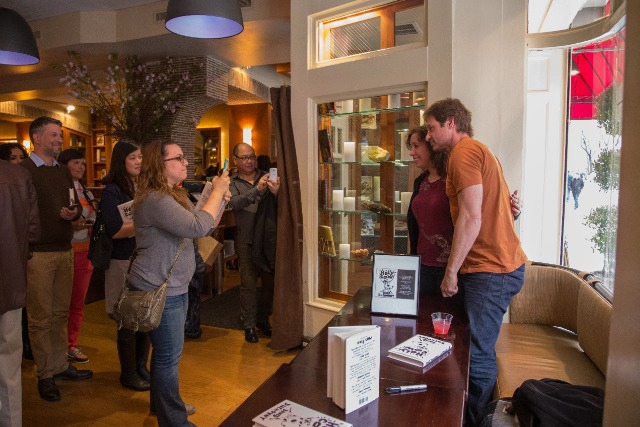 Fans were invited to (purchase a book) then wait on line for an autograph and a photo. Juan Ochoa, a visitor from Argentina who heard about the signing on Twitter, was so excited he nearly dropped his camera on the approach. "I'm just here on vacation, I didn't expect this to happen." It was New Jersey resident Kristen Kelly's second time meeting the star and she was hoping to make up for her deer-in-headlights experience when she met him at Comic Con. "I'm just gonna try to form sentences." (Spoiler alert: she froze again!) "I might just get back on line and try again," said her pal Danielle Lieberman. "Yeah, I'm actually going to I think."

When it came time for my interaction, I'll admit I had a similar kind of frozen moment. He was amidst a crowd of people at that point, having left the relative safety of his signing table. A group of fans were gathered to bathe in his aura; one over-achiever even brought him a cow-patterned jacket made from recycled packing materials. I had a list of opening lines I'd been rehearsing in my head (never a good sign): "I had a Kalifornia tank top but it doesn't fit me anymore!" "I had a framed picture of you in my childhood bedroom!" "I'm your biggest fan!" Gag.

As it turns out, David—first name basis yeah what's up?—isn't one to shy away from deeply personal anecdotes, evidenced by the conversation I overheard him having while I was running through my own pathetic list. The story goes that when Tea Leoni (his then-wife) was pregnant with their son, she asked him to "fuck her" (his words) to try and induce labor. I'm paraphrasing, but his response was along the lines of, "So I told her to lift her hind leg," a line which she apparently found amusing enough to repeat moments later on the phone to her mother. Whether they managed to fuck the baby loose that night was unclear.

In the end, I was forced to settle for a timid "Yes," in response to his query about whether I'd like him to sign the book. But I got to see Fox Mulder write my name with a Sharpie! And I got a photo with him of course, which may just replace that one that's still somewhere at my parent's house. Was it the best five minutes of my life? No, but the world's most perfect hand grasped my shoulder for almost 10 seconds and that's good enough to last me my next 30 years.

#david duchovny
#holy cow
#x-files
#original
Do you know the scoop? Comment below or Send us a Tip