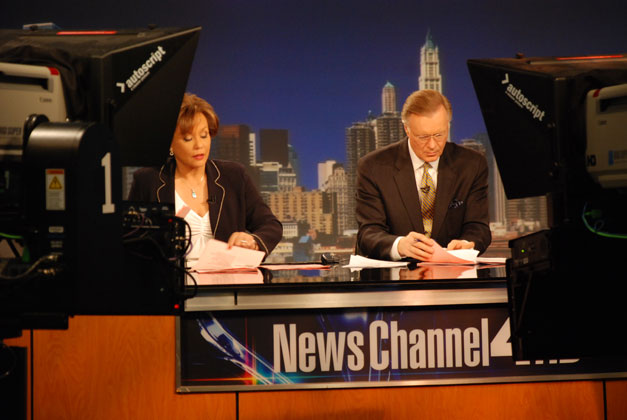 Photo of Chuck and Sue at work by author

Fans of Chuck Scarborough and Sue Simmons won’t have to stay up to 11 p.m. to see the long time anchor team together. WNBC will also have the team anchoring back at 6 p.m. starting next week. Simmons will also be moving back into her seemingly traditional 5 p.m. slot anchoring with David Ushery who will be displaced from the 6 p.m. newscast. Scarborough will still be the front man for New York Nightly News at 7 p.m. Lynda Baquero and Michael Gargiulo will be out of the anchor chairs, but will remain with the station.

The move, the biggest since Vicki Burns took the helm of the station’s news operation, does play to Channel 4’s strength - the decades of rapport and experience between Chuck and Sue. It does seem like a sound strategy to attract viewers, although the albatross of the infotainment show Extra at 5:30 still remains. 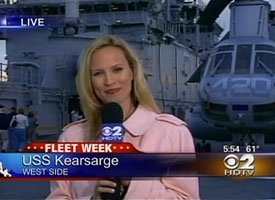 Over at WCBS, who finished the May sweeps a strong second, let Jim Rosenfield (another of Sue Simmons former co-anchors) say good bye on Thursday (obviously learning from the Warner Wolf fiasco). The speculation is that his replacement will be either Steve Bartelstein or Don Dahler will take his place. Given Bartelstein’s popularity and name recognition in the Tri-State he would probably be the best choice for the slot, although his checkered past may be a negative.

Rosenfield’s departure at the station was offset by the arrival of meteorologist Megan Glaros from WPLG in Miami on Wednesday. She jumped in with both feet reporting from the U.S.S. Kearsarge at Fleet Week, taking a look at the ship’s weather department along with talking with some of the ship’s crew. Glaros will be forecasting on the weekends for the station and will be also handling some reporting duties during the week.