Muppets Scandal: Kermit Was Once... A Lizard! 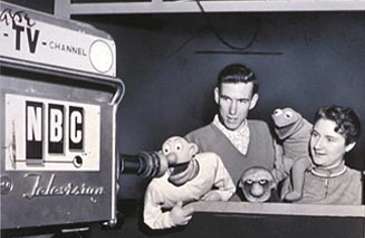 Kermit once told us that it isn't easy being green; words of wisdom from a frog who knows... but is he even a frog at all?! It appears that everyone's favorite amphibian—whose catchphrase declares, "Heigh-ho, Kermit the Frog here!"—was not born a frog, but rather, an amorphous, "lizard-like" character. In "Jim Henson: The Works," the master puppeteer explains that "all the characters in those days were abstract because that was part of the principle that I was working under, that you wanted abstract things." Kermit the glorified sock puppet made his first appearance in 1955 on Henson's show Sam and Friends (pictured at right) as a species-less creature made out of a turquoise ladies' coat discarded by Henson's mother, and two ping pong balls for eyes.

There seems to be some debate over when exactly Kermit made the switch from lizard-esque to frog-like—by the time Sesame Street premiered in 1969, Kermit had been given flippers and a collar to hide the seam between his head and body, which gave him a distinctly amphibious appearance. But it likely wasn't until the 1971 TV special The Frog Prince that the species switch became official, with Henson telling Regis and Kathie Lee in 1990 that "Kermit became a frog when we did a show called The Frog Prince" and the Green One himself chiming in to confirm, "Ah, yes. Once a frog I just stayed a frog thereafter."

It seems to have stuck with great success. Kermit, the frog, has authored two books, including the 2006 autobiography Before You Leap: A Frog's Eye View of Life's Greatest Lessons, received an honorary doctorate of Amphibious Letters from Southhampton College on Long Island, and joined Twitter. And with the star-studded Muppet Movie reboot being released this November, it looks like Kermit, firmly entrenched as a frog, will continue to have reason to wave his arms wildly while shouting "Yaaay!"

#jim henson
#kermit
#lizard
#muppet movie
#muppets
#species ambiguity
Do you know the scoop? Comment below or Send us a Tip