If you've spent any time hovering at the Bedford Avenue station this past month, you may have noticed an unusual plaque on one of the seats commemorating the "Untitled, Butt Pattern" there. It reads: "As a political statement on transit and the concept of rest, millions of New Yorkers collaborated over a period of decades to meticulously create these unique patterns using only their posteriors." It certainly caught the eye of NY1 anchor Pat Kiernan:

“New Yorkers collaborated over a period of decades” on the artwork titled “Butt Pattern.” Parody subway signs are one of my favorite things.

That "piece" is one of several others that have been put up guerilla-style at subway stations around the city in recent weeks. It's the handiwork of two college art students (they have requested anonymity) who refer to themselves as "MTA Curators" and run the Instagram account MTA Museum (each piece comes with its own audio guide in addition to the titles, descriptions cards, and photos). Since October, they've taken it upon themselves to try to curate our mass transit experience as if it were a living museum.

"We came up with this idea because people in NYC think that the MTA is so out-of-date, dirty, old, decrepit and not renovated," they told Gothamist. However, they claim their mission is not to highlight the state of the crumbling transit system, but rather, celebrate it? Their messaging is a little confusing.

The two told us they are trying to find "pieces" that represent our everyday lives and commutes, whether it's old pieces of bubble gum, dead cockroaches, or food and alcohol remnants. "We wanted to change the negative 'old' perception of [the subway] to fun and historical 'old,'" they said. "[NYC's subway system] is one of the oldest and most used [transit systems] in the world. It means the MTA is a part of New Yorkers’ lives. We wanted to let people know it by positioning it as a form of a museum in a fun and humorous way." Okay. But this is more fun to think of as The Museum of A Neglected Transit System.

As of now, they have posted cards at Bedford Avenue, West 4th Street, 14th Street L train, and Astor Place; they plan on doing one at 57th Street station next and are "currently looking for other aged and historical stations." They welcome submissions from people for new pieces. 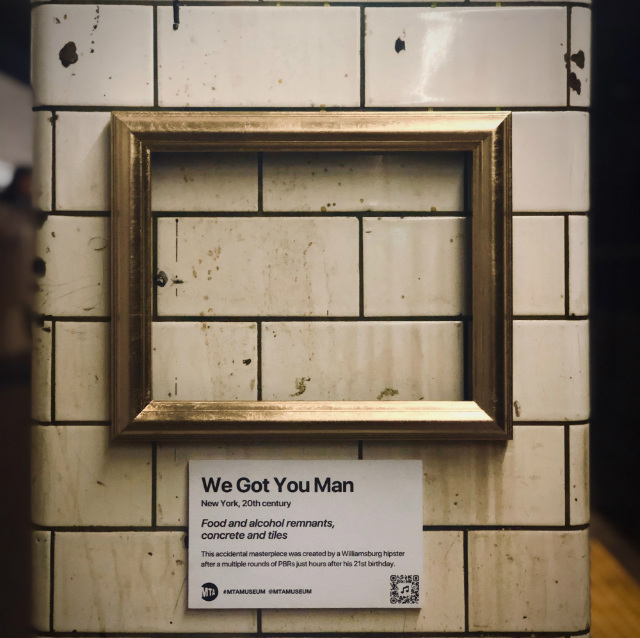 'We Got You Man.' "This accidental masterpiece was created by a Williamsburg hipster after a multiple rounds of PBRs just hours after his 21st birthday." (MTA Museum)

So far, most of the pieces are, remarkably, still in place. However, earlier this week they "we saw that a kid took Butt Card off and put it in his bag..." as they were hanging around the installation to hear what people were saying about it.

So far, they haven't had any interaction with the MTA, but they hope the MTA understands they create their art out of love, not mockery. "We're big fans of the MTA and we never have intended to be against MTA," they said. "We are doing this project to let people have a smile on their faces while they’re commuting. We hope the MTA staff also likes our project—don’t be mad at us!"

#art
#MTA
#mta museum
#subway
#subway stations
#original
Do you know the scoop? Comment below or Send us a Tip