Hello friend, and welcome to the wonderful world of Mr. Robot. If you're reading this, presumably you've been keeping up with the adventures of Elliot Alderson, his merry band of hacktivists and their fight against the all-consuming power of E. Corp. Or maybe "merry band" is the wrong way to phrase fsociety, the group of misfit hackers operating out of the El Dorado arcade in Coney Island, plotting to take down the world's financial infrastructure and free the people from debt slavery. If you'll recall last season, the big hack that everything had been building to succeeded, with fsociety decimating the financial records of E. Corp and throwing the world into complete chaos. Where can things go once the ostensible good guys win, after the narrator of Fight Club blows up the buildings housing all the credit card companies in America?

As it turns out, blowing everything up isn't necessarily a solution! Our return to the universe of Mr. Robot has revealed a world where E. Corp is having some difficulties but is still standing, everyday people are the ones suffering from the effects of the hack, unable to withdraw more than $50 a day from banks, and people tangentially related to and directly responsible for the world shaking hack of E. Corp are being murdered. The FBI has a weirdly obsessive and socially dysfunctional agent hot on fsociety's tail, and The Dark Army, a Chinese collective of hackers and fsociety's previous allies in the E. Corp hack might be working with E. Corp on some level. As for Elliot, his previously shaky mental state is worse than ever, as he struggles with remembering what happened in the three days after fsociety's hack and his waking up in the car of his corporate rival Tyrell Wellick, and if Wellick is even alive. And where we've gotten used to seeing him sitting at a computer breaking down code, he hasn't so much picked up a cell phone yet after three episodes in. The world is falling apart around everyone, but how much has really changed?

Let's start with the climax of last night's episode, no not the bathroom sex (sorry, sorry) but three straight chess stalemates between Elliot and his alter-ego/hallucination of his dead father. A tie in chess isn't exactly the most exciting thing the world, but quick cuts and Christian Slater's seething anger, and his insistence that Elliot can't ever beat him because he is him helps make it gripping TV.

Chess, with its required patience and thinking moves and moves ahead, is the perfect way to put the second season of the show into action, after its spent the first quarter of its run with characters in somewhat of a holding pattern. Elliot's been trying to hold off his Mr. Robot alter-ego, his sister Darlene has been trying to carry on fsociety's work, Elliot's best friend Angela has been trying to figure out her place and her vaguely Henry Paulson-esque boss's game in her new job at E. Corp. Tyrell Wellick's sexy wife Joanna has been dating a dim but hot bartender/DJ while waiting for her missing husband's severance package, and the new piece of the puzzle, FBI agent Dominique DiPerro, has been trying to track down who destroyed the world economy. And after sitting around on the board for three episodes, the pieces finally seem to be moving.

Some of the moves only seem to set up more moves later on: DiPerro, at the end of the last episode, has found fsociety's Coney Island HQ, and in her one scene tonight, also reveals she's found a bullet casing in the building, proving some kind of wrongdoing has happened there. Other moves blow up in the players' faces: Joanna tries to trade testimony against Tyrell in the case of the murder he committed against his colleague's wife to her husband in exchange for the severance package, but is coldly turned down. Angela tries to trade what she thinks is her leverage in an old lawsuit against E. Corp, the plaintiffs' insistence on independent oversight of the E. Corp power plant that polluted their town, for an office on the 20th floor and her company rival's job. She too is rebuffed, her boss calling her gambit impressive, but the leverage "all in her head." 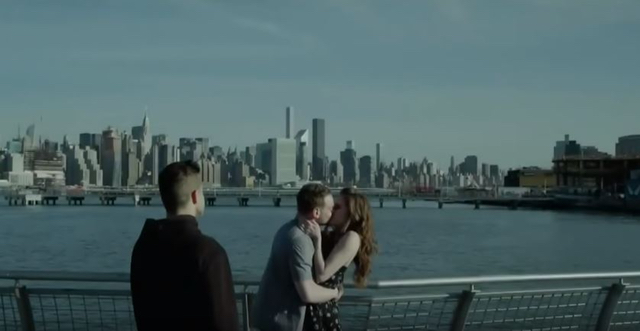 Darlene finally comes to ask Elliot to get back into the exciting world of hacktivism, but as a hardass. She also seems to be getting followed by mysterious men, and after a visit/bathroom bone with her Dark Army contact, he lets her in on the news that the FBI is watching everyone involved in the E. Corp hack.

Elliot meanwhile, takes longer than everyone to take some kind of action, after being given a chessboard as therapy by a shadowy, clearly dangerous "businessman" who needs his help, played by Craig Robinson. Mr. Robot challenges Elliot to a one-on-one game to determine which personality will reign supreme from then on, a challenge that Elliot sits on and sits on, still unsure. Finally, his Seinfeld-obsessed friend Leon, played by Joey Bada$$, explains to Elliot that "back in the Age of Enlightenment, motherfuckers used chess as a means of self-improvement," seeing as how Tony Robbins hadn't been invented yet. Leon challenges Elliot to dream, to fight for his existence. Elliot does dream, of a normal life, of friends, of a nice dinner table in an alley somewhere. But ultimately the dream still contains the image of E. Corp's HQ crumbling on the skyline while he and his friends watch.

Elliot finally sets up in a park and plays to the most exciting chess stalemates you'll ever watch on television, where he learns that fighting a part of himself, specifically Mr. Robot, will never go anywhere. So, after a phone call from Darlene where she asks for help more softly, Elliot is back in the game. He heads to Craig Robinson's office and tells him he'll help him with that computer problem, when in fact what he's doing is getting the full story on whats going on from Darlene in an IRC channel. And then, things end with Elliot deciding on the simple task of just hacking the FBI, as you do.

Elliot is finally back behind a computer, back to hacking. In a different kind of show or movie, this would be the hero's triumphant moment: Rambo coming out of retirement, Luke pulling his lightsaber out of the snow in the wampa's cave. This moment though, only feels like more trouble will be coming down the pipeline.