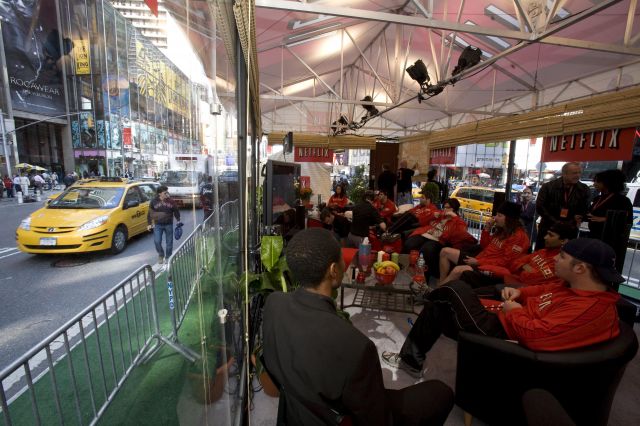 Today in Times Square the world's laziest competition began: the Movie-Watching World Championship. For five days, 'round the clock, these eight folks will be in a world of celluloid. Each competitor is attempting to spend the full five days in the arena "where they’ll watch movie after movie in the hopes of breaking the movie watching world record of 120 hours and 23 minutes. The event champion will win a $10,000 cash prize, a lifetime membership to Netflix and the coveted Netflix Popcorn Bowl trophy." Mmm...popcorn bowl trophy.

Tomorrow morning the competitors are in for a headband-clad, mesh tanktop-wearing treat, as Richard Simmons will stop by and make them sweat before returning to their couch potato-state.

And this just in from the frontlines: the crew has already watched Iron Man, Best in Show and they're currently watching Ghostbusters. Later they'll miss the debate as they take in The English Patient. The rules are after the jump, and essentially state that there's "10 minute breaks between movies, no sleeping, no shutting eyes."

Guinness World Records rules require the contestants to watch films non-stop without averting their eyes from the screen. Competitors will be given 10 minutes between each movie, or approximately every two hours, to refresh themselves. Eating, drinking, standing and stretching are allowed as long as eyes are on the screen. Gourmet, chef crafted popcorn will be provided by Dale and Thomas Popcorn throughout the event. Medical professionals will monitor the contestants’ conditions throughout the event and assess if contestants are truly “watching” or are simply staring blankly at the screen.

#marathon
#Movie-Watching World Championship
#movies
#richard simmons
#Times Square
#world record
Do you know the scoop? Comment below or Send us a Tip