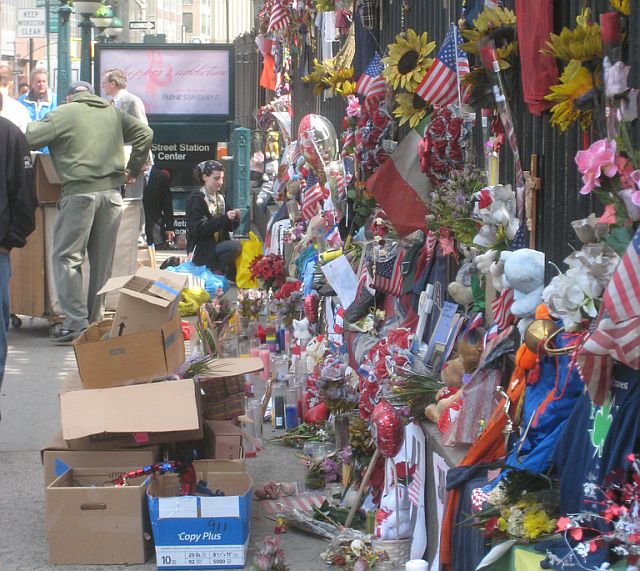 If you passed by St. Paul’s Chapel near the World Trade Center site yesterday you may have felt like you’d stepped back through time to the city’s raw, post-9/11 days, when the chapel’s fence was festooned with photos and tributes to the attack's victims. The new Nora Ephron movie Julie & Julia recreated the makeshift memorial, which was dismantled in November 2002. (Using a crane, the crew also pasted leaves to the trees.)

Amy Adams stars in the film, which is adapted from the book Julie & Julia: 365 Days, 524 Recipes, 1 Tiny Apartment, a chronicle of Julie Powell’s attempt to cook every recipe in Julia Child’s Mastering the Art of French Cooking in one year. Although the two never met in real life, the film intertwines their life stories, with Meryl Streep playing Julia Child and Stanley Tucci as Paul Child.

But don’t let The Devil Wears Prada-esque casting and Ephron’s Sleepless in Seattle pedigree lead you to lump Julie & Julia into the chick flick category, as Times reporter Michael Cielpy recently did. Powell, who spoke with Gothamist about her book in 2005, says Cielpy’s an “asshat” for slapping on chick flick label, which has become as tired as it is vaguely misogynistic.

And perhaps it is only New York Times-style stuffiness that leads him to define chick-lit—as if it were some up-to-the-minute new phenomenon rather than a phrase that entered the lexicon an ice age or so ago—as "books written for, and often by, professional women in their 20s.... [with] covers... bright and fluffy, with amusing illustrations...and an outlook... unabashedly feminine."

Unabashedly feminine. Yes, we females are so silly and dear with our femininity and whatnot… But to write of the movie as being about me and the "cooking enthusiast" Julia Child? COOKING ENTHUSIAST?!!! Pardon my french, but what the FUCK?! I don't consider myself a raving old-school feminist, but this article makes me want to honestly observe male-oriented body parts by ripping them from male bodies.

Maybe we’re just afraid of getting our balls ripped off, but something tells us Julie & Julia’s going to kick ass.