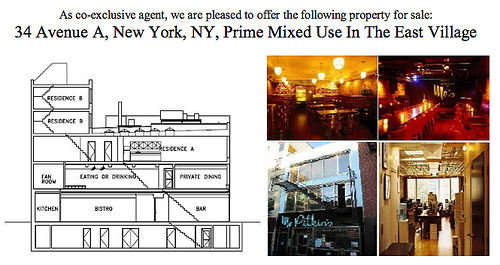 Earlier this month the NY Post reported that Mo Pitkin's House of Satisfaction might be closing, which was met with a letter from the owners saying the Post "as usual, mixed fact with fiction." Last night a reader sent over the following letter, written by the same folks, which was sent to performers of the space:

We're sorry to say, but Mo Pitkin's will be closing on October 20th, 2007, with a closing night party/performance on October 21st at 8pm. Building our bi-level performance space was an enormous undertaking, done with a lot of love, but it created a debt load that the club just could not sustain. Our deepest apologies to all those with gigs subsequent to that; with the recent press articles about our "imminent" closing, it's just become impossible for us to continue to stay open.

That's right, come next month there will be no more Satisfaction (at least not in the form of a deep-fried mac & cheese)! The letter goes on to say they aren't sure who will take the building over, but we're hoping it will still host a variety of events -- and last a little longer than two years. We'd have to agree that with the duplex apartment complete with patio on top of the space, it's quite a steal for only $5.9M.

#events
#gossip
#house
#love
#Mo Pitkin
#ny post
#real estate
#venues
Do you know the scoop? Comment below or Send us a Tip