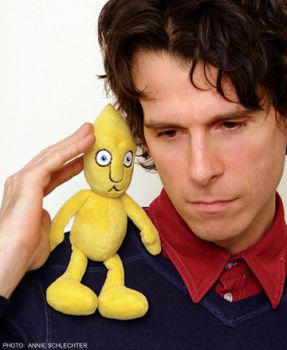 Morgan Taylor, a Brooklyn-based illustrator/musician, has created a little yellow cone headed alien creature who's enchanting kids and adults alike. The little guy is called Gustafer Yellowgold, and the brainchild of Taylor joins him on stage via animated projections. The mellow songs have grabbed the attention of parents and kids alike, but Taylor has also crossed over to the indie world opening for bands like Wilco and The Polyphonic Spree.

As for Gustafer, it's been said that he's “something John Lennon would have created.” Starting this Saturday and running through May 3rd, you can catch Taylor and his creation in their off-Broadway debut, "Gustafer Yellowgold's Mellow Sensation".

How and when did you create Gustafer Yellowgold? I created the character image many years ago when I worked at Gem City Records in Dayton, Ohio. I was in charge of decorating the marker board along with new release information. This yellow, cone-headed guy was spinning records, frying up frogs on the oven range and whatever crazy stuff I was thinking about. Many years later when I was looking for an identity for the 'first person' to star in my little weird story-songs, I stuck him in there. A very natural pairing that I never even knew would come together.

Do you find adults enjoy the show as much children? Yes, they do. And I must admit there are times when I'm not sure who I'm playing for.

Is it more difficult to write songs for such a wide spectrum of ages? No, not really. I'm just doing stuff that gives me a kick.

What was opening up for bands like Wilco and The Polyphonic Spree like? Were the audiences responsive? Yeah, those moments were when we saw the material could hold up for all ages. What a test! Wilco is possibly the greatest active band musically at the moment. The Polyphonic Spree really took a shine to the oddball-ness of Gustafer, and had us play their Holiday Extravaganza in Dallas the last two Christmases.

You've got a pretty long off-Broadway run coming up, is this the first time you'll be taking on such an endeavor? What can people expect? I'm waiting to see how the theater run influences the show actually. There's something that happens
when you are in residency somewhere that relaxes you into finding something new in the music. I hope that works!

Please share your strangest "only in New York" story. I wish I could share a story like that to the public. I've worked in bars in clubs for so many years before doing kids' shows that I've seen some pretty outrageous things. I don't know, bar-brawls, big heads of hair on fire, homeless guys getting on stage and being really good singers.

Which New Yorker do you most admire? The Rea Irvin cover issue with the guy holding the monacle? Very iconic.

Given the opportunity, how would you change New York? Very carefully, not to stick it with baby pins

What's your idea of a perfect day of recreation in New York? A good walk in a park.

What's your current soundtrack to the city?
The words inside of any of the four J.D. Salinger books.

Best cheap eat in the city. It's not cheap, but Babycakes' vegan cinnamon rolls are the greatest.

Best venue to see/play music. The Living Room on Ludlow, and Arlene's Grocery on Stanton. Something worthwhile passing through most every night. Always great soundmen there.

#Gustafer Yellowgold
#illustrator
#interview
#Morgan Taylor
#musician
Do you know the scoop? Send us a Tip