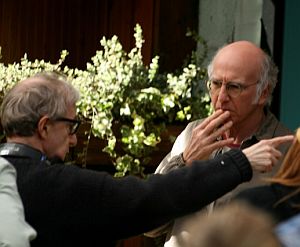 After years of hemorrhaging film production business to cheaper locations like Canada, New York City is seeing a spike in movie shoots, back up to the pre-9/11 level. Bloomberg reports that the city saw a 36% rise in production last year, with over 245 movies and television shows shot citywide in 2007. A consulting group hired by the mayor’s office determined that the industry pumps $5 billion a year into the economy and employs some 100,000 people.

The increase is attributed to a number of factors like the guttering dollar and an increased flexibility on behalf of the city when it comes to shooting at famous landmarks. And last month Governor Paterson signed a bill giving bigger tax incentives for productions that complete 75% of their work in the five boroughs; it’s now a 35% tax credit, up from 15%. (Which bests Connecticut's competitive 30%.)

Last week ABC confirmed that production on Ugly Betty will be moving to New York, prompting crew members to buy a full-page ad in Variety warning Governor Schwarzenegger that the loss of movie and television jobs is damaging California's economy. In recent months, New York has hosted productions that include Woody Allen’s current project (pictured), the remake of The Taking of Pelham 123, Bride Wars, Julie and Julia, and The International (starring Clive Owen). Of course, this also means less parking and more pushy production assistants stopping you on the sidewalk during filming – apparently, they do have a right to do that.

As if anticipating the wrath of impatient pedestrians, Ugly Betty star America Ferrera told David Letterman she's "excited" about the move but, "New Yorkers are really cool and (laughs) I’m just a little nervous how they’re going to accept the show since we’ll be on the streets, blocking the way.”