More Moore For The Masses 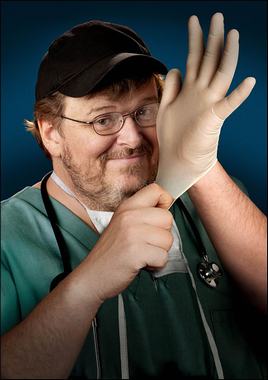 After Michael Moore's newest documentary, Sicko, leaked onto the internet last week, the movie's distribution companies Lionsgate and Weinstein Co. have taken an unusual tactic to turn unauthorized distribution lemons into viral marketing lemonade. Originally set for a wide release on June 29th, Sicko will now unspool at the Loews Lincoln Square on the Upper West Side starting this Friday, in addition to screening it for preview audiences around the country throughout this week, according to the New York Times.

After an enthusiastic reception at this year's Cannes Film Festival in May, there's been some mixed early reviews of Moore's indictment of the American health care system, so the bumped up release seems to be to combat that hot and cold buzz, as well as a response to the "growing demand" for the movie, as explained by Gary Faber, Weinstein's executive vice president in charge of marketing. Of course as someone who's anti-copy right law, Moore has said he's fine with the distribution, as long as it's not for profit.

Like with the highly buzzed about releases of the Oscar-winning Bowling for Columbine in '02 and Fahrenheit 9/11 in '04 which won him the Golden Palm at Cannes that year and went on to gross over $200 million worldwide, Moore obviously craves a media stir. The question though, for those who follow box office receipts, is whether the availability of the movie for free on the internet will dampen people's interest in seeing it theatrically, or heighten it.

As for the quality of this new bit of agit-prop from the pudgy Michigander (which Gothamist caught last night at an advance press screening), it's a persuasive and disturbing two hours. Moore introduces us not only to a number of Americans screwed over by their lack of health care, but also interviews numerous health care industry employees disgusted by the business's practices. These stories from ordinary Americans are heart-wrenching, as is the footage Moore shot of very sick 9/11 volunteers finally getting the health care they desperately needed from the socialized medicine system in Cuba. Unfortunately like most Moore movies, the shocking state of America's relationship to its more disenfranchised residents is tempered by the ridiculousness of his on screen antics. Moore filming himself on a boat outside of Guantanamo Bay using a megaphone to try to get entrée into the holding center's medical facility is unnecessarily over the top, no matter how you feel about the issue of privatized heath care.