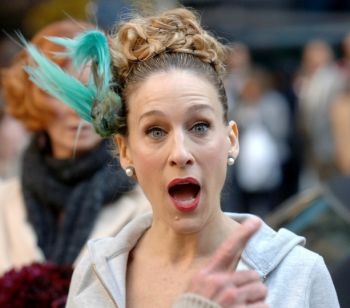 The Sex and the City movie is causing more trouble today, officially making it as controversial as "a Taliban recruitment video," at least according to Jeffrey Wells's scathing review.

Following the premiere's overbooking incident, both New Line Cinema and Radio City Music Hall are pointing the finger of blame at each other. With thousands of ticket-holders turned away, The NY Post wants to know who's got the blood, sweat and tears of Sex fanatics on their hands.

"The movie studio gave out way more promotional tickets than could fit in the orchestra," said one insider. "Radio City managers told the New Line people, 'You can solve this by opening up the mezzanines, which have 2,700 more seats - but they wouldn't do it."

However, a New Line source countered, "It was Radio City Music Hall making that decision. They took control of the fan line. They turned the fans away."

Meanwhile, no one even liked the movie anyway, not even the #1 Fan who paid $19,000 to see it. Ella Sherman ended up getting into the premiere after landing herself on the pages of The Post, only to turn around and say, "I could've written that movie and done a better job. It was like one person wrote the first half and it was Sex and the City and another person wrote the second and it was The Bold and the Beautiful." Zing? The happy ending is that she gets her money refunded; she wasn't the only one to foolishly throw down thousands, however.

The Daily News reports on two Canadian women, Jen Ferguson and Devon Cross, who got their designer garb wet as they waited hopelessly in the rain outside the premiere, grasping their golden tickets. The twosome('s parents) spent $16,000 on their 5-day trip from British Columbia and "had to lean on umbrellas to ease the pain in their feet" when the heels and the line became too much for their soles. Upbeat, and apparently unaffected by wasting their parent's money, they say they'll just see the movie when they get back home.

#bad reviews
#chaos
#fans
#money
#premiere
#sex and the city
#sjp
Do you know the scoop? Comment below or Send us a Tip
A new Gothamist is coming! We’ve moved comments over to our beta site. Click here to join the conversation and get a preview of our new website.