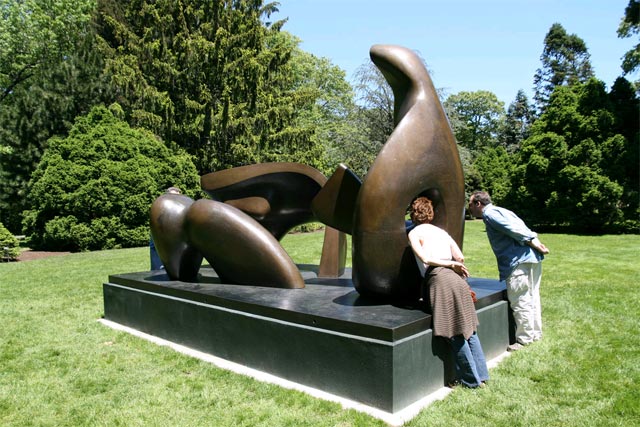 The other weekend saw the opening of Moore in America: Monumental Sculpture at the New York Botanical Garden. The exhibit features twenty-one of Henry Moore's giant biomorphic sculptures placed at well considered locations across the garden grounds.

Moore meant for his sculptures to be part of a landscape, where they could be seen from many perspectives as the light and scenery changes throughout the seasons.

Ongoing at the garden is Darwin's Garden: An Evolutionary Adventure which chronicles how Charles Darwin's botanical studies contributed to his development of the theory of evolution. One small gem is the collection of found objects that Moore drew inspiration from. The objects are on view, along with some of the maquettes Moore created, in the Botanical Garden's Mertz Library. While at the library be sure to wander upstairs to see the "His Life With Plants", portion of the Darwin exhibit. With Plants captures Darwin's intellectual growth as a botanist through displays of his notebooks, original manuscripts, and plant collections as well as a number of rare old books filled with beautiful botanical illustrations.

"Moore in America" will be at the NY Botanical Garden through November 2nd. The Darwin exhibits close on various dates beginning on June 15th.