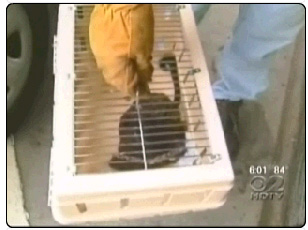 Souvenirs are usually inanimate doodads, so we must update the story of the man who smuggled a pygmy marmoset from Peru under his hat. The monkey attracted attention not from airport screeners in Lima or in Fort Lauderdale (where Spirit Airlines Flight 180 connected) but from passengers on the flight to Laguardia who noticed the monkey hanging from the man's ponytail.

Our favorite part of the story is how other passengers apparently asked the man if he knew he had a monkey on him. Or maybe how the monkey sat quietly next to the man after the discovery. Or perhaps how Spirit Airlines spokeswoman Alison Russell said, "It is kind of a spirited monkey. That will be the nickname of the monkey: Spirit."

However, our most unfavorite part of the story is from the Daily News: "Laura Uselding, a spokeswoman for the Transportation Security Administration, said that had the monkey been carrying weapons or explosives, an alarm would have triggered." Thanks, TSA, we can't bring our sunblock or our bottle of water (we have to buy a $4 bottle at the gate), but we can illegally bring monkeys onto the plane.

Customs and Border Protection told the Post, "Generally speaking, anytime someone is bringing in an animal and it's not properly caged, cared for and declared, they would be quarantined. We aware of the incident and we're working with the other agencies to determine the exact circumstances of how this non human primate got into the country. Clearly there's some monkey business on somebody's part."

The CDC has taken Spirit for disease testing and will quarantine it for 31 days (quick, time to Netflix Outbreak again). If healthy, the monkey could head to a zoo. We hope that his life in the U.S. will be better than being peddled on the streets of Lima. And the Bronx Zoo has pygmy marmosets - no need to smuggle them in!