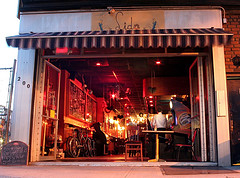 After questioning the future of Red Hook, we decided to interview someone who can tell us what's really happening in the 'hood. Molly Franklin is the manager of Lido Bar (pictured), and has a thing or two to say about where she spends her days and nights.

Give it to us straight: is Red Hook on the up, on the way out, or somewhere in between?
Red Hook is somewhere in between. The neighborhood has undergone a huge transformation in the ten years I have been acquainted with it. While the transportation options will most likely always limit it's "growth", I think the bulk of the people that live here enjoy the intimacy of the neighborhood. It is still zoned as an industrial/manufacturing zone. The mall-ification of the city may take a wee bit longer to happen in Red Hook, if that is what on the way up actually means. I think that is a good thing.

Tell us about Lido's, and what it's like to run a bar in Red Hook.
Lido Bar is the living room/backyard for our neighbors. We aim to be a comfortable refuge for all of our favorite drinkers. I think it is actually a reflection of how tightly-knit our neighborhood actually is. I have regulars that started coming to the bar when they lived in Manhattan, and the bar was a deciding factor in their having moved to the neighborhood. We just had two of our earliest regulars (they met at the bar) get married. I can't imagine a better group of people to be open for than our neighbors. The toughest part for the businesses along Columbia Street is the never ending road work. We went from being a two-way street to a one-way until the indeterminate end of the project, and during the summer of 2006, the entire street was effectively shut down. You can't fight city hall, and doing so as a small business is nearly impossible. Infrastructure changes are vital to the expansion of the neighborhood, but it is being done to encourage growth opportunities for big companies and developers. That is the wave in the city and it is no different in South Brooklyn.

Any good stories about the locals?
Our locals are pretty interesting. I mean they build retro submarines. What else could you want?

Many people complain about Red Hook being hard to get to, can you tell us some interesting things to check out once there?
I am a fan of Dub Pies for their coffee, Baked's cupcakes, LaNell's tequila selection, Defonte's sandwiches, Hope and Anchor's breakfast, Good Fork's sweetbread salad... and so much more. My favorite thing is to wander around and take in the strange quietness that reigns on weekends and soaking up the lovely urban decay that will all vanish in the future.

Please share your strangest "only in New York" story.
I think it was in '92 when I lived on Sullivan St. in Soho, a man in an ill-fitting pinstriped suit with a fake Irish brogue and a fake mustache half-peeling off of his lip followed me into my vestibule at 3AM to tell me he and the Ancient Hibernian's had a job for me in London. To get him away from my front door, I agreed to let him take me for an Irish coffee at a place I knew was closed and didn't have a liquor license. When he tried to pull me into a car I whacked him in the head with my grocery bag that had a can of tuna and a large bottle of water, which left him sprawled across the hood of a taxi as I ran home. I may have lost out on a great employment oppotunity, but I still think I made the right choice.

Which New Yorker do you most admire?
Debbie Harry.

Given the opportunity, how would you change New York?
A time machine? I don't miss rampant crime and extra sticky subway stair rails, but I do miss a time when nightlife was more mixed. Table service is the emblem of all that makes me sad in this town. If we continue to segregate via socio-economic lines, we will never get to know anyone that is different than we are, and that is a sad boring life, indeed.

Under what circumstance have you thought about leaving New York?
I think about moving to a beach and teaching pilates when my band is not on tour all the time.

Do you have a favorite New York celebrity sighting or encounter?
The only time a celebrity encounter made me nervous was waiting on Andy Richter and his fiancee years ago at Aquagrill. He is so funny to me, and they seemed so happy together, it made me all giddy inside. Strange.

What's your current soundtrack to the city?
The 60's band Love's Forever Changes is hitting me like a ton of bricks this summer, even though it is 40 years old. And the line-up to the soon to be scheduled Lido-palooza: Goes Cube, Frauke, Guyz Night and my band Superdragon. My friends make really amazing music.

What's the best subway line?
The F when it's working.

Yankees or Mets?
Red Sox, or the Mets. Willie Randolph is a class act.

Best cheap eat in the city.
The Red Hook fields. 10 bucks and two people are stuffed.

Best venue to see music.
SO many. Mercury Lounge is a great size. Irving Plaza was super nice to me when I was on crutches. Frighteningly Clearview nice, but REALLY amazing at the Isis/Jesu show.