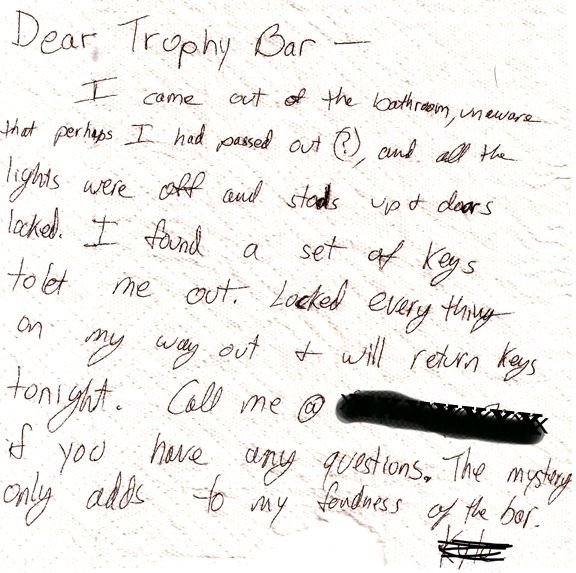 A note from Hausmann to Trophy Bar when he thought he'd found a way out.

Ever wish your favorite bar would stay open til sunrise? The NY Times retells the tale of one young pioneer who braved his favorite watering hole through the witching hours all alone, as the staff went home and the doors were locked up. Kyle Hausmann, a 24-year-old Harvard graduate, went to Trophy Bar in Williamsburg on May 20th -- smart enough for the Ivy League, sure, but drunk enough to find himself locked in the establishment with no escape plan. The young lad was in the bathroom ("for reasons that are unclear even to him, he stayed in there for quite a while") when the bar was locked up.

Hausmann narrowed down his options, but decided his safest bet, calling the police, was too "extreme." Instead he attempted to open all the doors, contemplated another drink, called home (his roommate proving to be no help), hit redial on the bar phone (reaching the owner's mother in Las Vegas who was even less help), checked his email on a bar laptop, Googled what to do if you are locked in a bar, and tested out a pair of keys to the place that proved useless from the indoors (see note). After an internal debate about jumping a fence outside (and a quick nap), the owner, Jim Rowe, walked in at 8:30 a.m. Both seemed to have an "all's well that ends well" mentality about it, Hausmann has since returned and the Trophy Bar even blogged about the incident.

Well, it beats falling asleep on the F train and waking up in Coney Island -- though that would have probably made for a more interesting read.

#bar
#Kyle Haussmann
#locked in
#note
#overnight
#trophy bar
Do you know the scoop? Comment below or Send us a Tip
A new Gothamist is coming! We’ve moved comments over to our beta site. Click here to join the conversation and get a preview of our new website.