Milton Glaser's iconic 'I ❤️️ NY' logo was introduced forty years ago this week, as part of a marketing campaign aimed at convincing tourists that New York was not the hellscape they'd seen in movies and the news.

The pop-style logo, one of the most recognizable and circulated images in the world, was actually conceived a year earlier, in the back of a cab. En route to a meeting with the campaign, Glaser hastily scrawled the four character logo on an envelope, and presented it to William S. Doyle of the New York State Department of Commerce. The red heart and general idea were there, though the decision to stack the characters wouldn't come until later—"subliminally" inspired by Robert Indiana's LOVE, according to Glaser.

But even with this prototype, Glaser says he knew he'd tapped into something special. “I felt excited," he said in one interview with the Telegraph. "My design had a sense of inevitability. The form and the content were united in a way that could not be taken apart.” 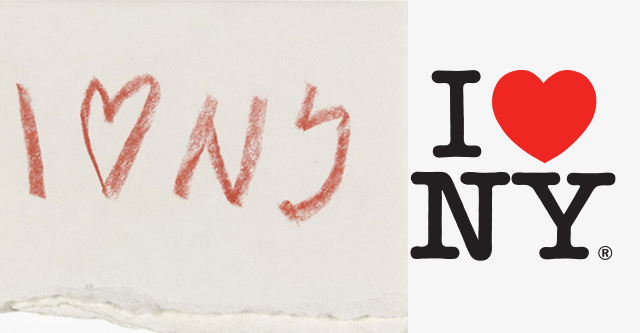 Glaser's 1976 sketch of the logo, and the finished product.

The enduring appeal of the design was apparently not obvious at the time. Glaser, who was originally told that the campaign would last just a few months, even offered the idea pro bono. Today, the official merchandise bearing the 'I ❤️️ NY' logo generates millions for the state annually, while Glaser still hasn't seen a penny.

Not that he's bitter. Talking to Gothamist earlier this year, Glaser offered his own assessment of the "emotional" and "real" logo:

"Ever since the Big Bang, we've all been made of the same material. Everything and everyone is connected, but every once in a while the mind is stimulated toward a recognition of an even deeper connection. 'I ❤️️ NY' was introduced in 1977, and to this day I can't walk down the street without seeing it four, five, six times. Partly I think it endures because it was never just a marketing device, even if it was part of a campaign to promote tourism. It was an expression of how people felt about New York during a very, very tough time in the late '70s. We wanted to let the world know that we still loved this city. It was emotional, and it was real."