Milo Ventimiglia On The Horrors Of Online Dating, 'Gilmore Girls,' And New Series

Milo Ventimiglia's had a busy year. Not only will he be reprising his role as nihilistic heartthrob Jess Mariano on Netflix's much-anticipated Gilmore Girls reboot, but he's been working with James Frey (yep, the A Million Little Pieces dude) on Relationship Status, a new show streaming on Verizon's free go90 app. The twelve-episode series, which premiered at the Tribeca Film Festival, follows a few dozen 20-and-30-somethings in New York and Los Angeles as they try to navigate dating in a world full of apps and social media. We sat down with Ventimiglia, who produces and stars in the series, to talk a little about dating and television-watching in the digital age, as well as to dish on Jess's return.

So you are in, and I believe you’re also producing, Relationship Status? Yeah, I’ve actually been a producer longer than I’ve been an actor on it. My partner Russ Cundiff and I were lucky enough to get a chance to work on it with Full Fathom Five, which is James Frey’s company, and Todd Cohen and Laura Terry over there. We’ve been on it with development for almost two years before he found a praetorship with StyleHaul, and they helped us get to the finish line and cross the finish line, and get it out in a way that, hopefully, a lot of audience is going to be aware of it and streaming it on Go90.

And how did you get involved? I had the script slipped to me, and my partner and I read it and we just loved it. We thought it was very relevant to the current trend of a million different dating apps today. Bumble and Riot and Happn, Tinder, and Grindr, and all these ways that people are meeting up nowadays and trying to find love, and even friendship, or even just something physical. It was a great story in the center of all that. And we thought it was relevant to a broader audience, so we jumped onboard and then we found a set of partners in StyleHaul. Once that happened, we moved pretty quick into production, wrangled up 30 actors in about 20 days, and shot a show.

You shot in L.A. and New York? No, we shot in Los Angeles. We were a pretty low-budget shoot, so we had an opportunity to go to New York but we would’ve sacrificed something else creatively had we chosen to go there. I think if we were to do the show again, we’d probably split between New York and Los Angeles. New York is such a great character in and of itself. It’s always such a blast to shoot in New York.

It seems pretty appropriate that the show's streaming on a mobile app, since it's all about how the internet has changed dating. It seems it’s changed television as well. Why did you go with Verizon, and not Netflix or Hulu or any of those streaming sites? That was a partnership that StyleHaul had introduced us to, and their enthusiasm and their want for a story like Relationship Status just stood out, above and beyond anybody else. There are a lot of companies now that are producing content and platforming content, and Verizon Go 90, they really, really had a want and a desire, with this project specifically.

Can you tell me a little bit about your character on the show? I play Jack, who is a gay bartender from New York. He’s pretty fiery and he’s kind of there to help people along in life. He’s a guy who puts his friends ahead of himself. His enjoyment of life has already peaked, so I think if he can open the door a little bit further and bring his friends along, for him that’s the most fun. He’s a bright, energetic, fun, filthy guy. Filthy in the best possible way. 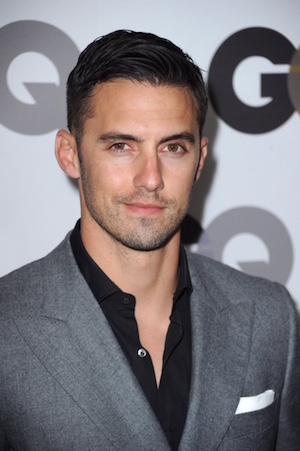 How do you think that online dating and apps and that has affected dating in relationships, or just in interpersonal relationships?

I feel like it’s opened the dating pool to not just your immediate physical space—you know, who you can see in front of you—but to who you can actually connect to. I think at the same time though, it’s a slippery slope. I think just as quick as you can swipe left or right, people are quick to say “oh this person isn’t right” or “oh this person is the one” when really, it takes time to get to know someone. It takes time to get to know someone and know that it’s not going to work or it is going to work. So I think that even though it’s opened up the amount of people we’re able to interact with in any given five minutes of free time, it’s also making that interpersonal connection a little more difficult and a little rushed.

I have to veer away from Relationship Status. If I don’t ask about this, I’ll get fired. The Gilmore Girls reunion on Netflix—you're a part of that. I am.

How many episodes are you in? I will say it’s more than two, less than four.

And how did you get involved with the reboot? [Showrunners] Amy Sherman-Palladino and Dan Palladino. I stayed close to them for the years after I left the show. And they called me up and said, "Hey this is happening," and I said, "I will be there."
They are the most talented writers, but they're also the most incredible people. And for me it was just another opportunity to spend some time on set with them, my good friends, and revisit a character I know a lot of people enjoyed.

Is there anything new or exciting we can expect from Jess that you're allowed to disclose? I mean, there's not much I can say, other than it's 100 percent Jess. It's new situations and new scenarios, but with the same guy you love and hate, and hate to love, and love to hate.

Which of Rory's "men" do you think she should end up with? Aw man, for years I never pondered that. I stay away from it. And I';m a bit jaded because I know Jared [Padalecki] and Matt [Czuchry], and I think they're the greatest guys on the planet. And I would get dissuaded thinking about them, thinking of them as human beings, like real people, real guys, and then their characters.

I was always Team Jess. I was very anti-Logan. I think everyone was just a little hard on Logan. There's a company now that makes a "Team Jess" pin, it's a company called Adorn the Hunter. My friend sent the link to me, and I was like, "Oh my god, I am now an enamel pin." So I bought like, ten, and gave them to my mom and to some friends.

That's so exciting! I have to get one. Put that on your jean jacket and wear it with pride. 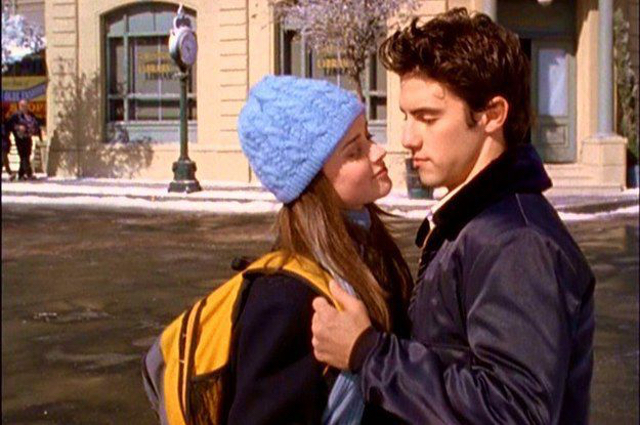 Rory and Jess on Gilmore Girls.

My editor is very anti-Luke, and she would like to know if Jess hates Luke or if Luke is a terrible character. I don't think Jess has hate in his heart, I think he has very strong disdain, but I don't think that applies at all to Luke. I think when Jess was first introduced to Stars Hollow life, he didn't want to be there, he didn't want authority, he didn't want anyone who had a wider perspective on life than him to tell him what he could be doing or he should be doing, or shouldn't be doing. I don't think he had any hate for Luke. I think it was one of those things where it took time for the two of them to recognize their differences and be able to function in the same space.

When it comes down to it, Luke is a man that took Jess in and gave him good principles and values and a kind of perspective on life, even though I think he definitely drove him nuts. It helped Jess a lot. It helped create, I think, a better version of Jess, being with Luke.

Have you started shooting yet? Oh,I already finished the shoot. I'm done. I think they have a couple more weeks left, but I wrapped last week, so I am all done.

And how was it being back on set with everybody? It was amazing, super fun. We were all pretty spread out but when it came down to it, it was like visiting your old elementary school again, or your high school. You know, seeing how small the desks are and getting nostalgic about old memories. I loved being on the Warner Brother's lot. It was fun to revisit.

#dating
#gilmore girls
#interview
#Jess Mariano
#milo ventimiglia
#relationship status
#original
Do you know the scoop? Comment below or Send us a Tip