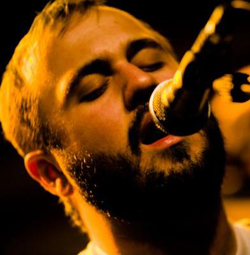 Just when you thought you could sit this New Year's Eve out, the Knitting Factory pulls you back in. It's no easy task dragging us out of the apartment on amateur night, but this full-club show, curated by Akron/Family, boasts a lineup we couldn't refuse: Dirty Projectors, Deerhoof, Megafaun, Deer Tick and a cast of thousands will invade TriBeCa for what's sure to be an unforgettable night of idiosyncratic alt-indie revelry. It's also the last concert ever at the Knitting Factory's storied Leonard Street location; next year the owners will move to the promised land, across the East River to Williamsburg. Earlier this week, we spoke with Miles Seaton from Akron/Family about the upcoming gig, the forthcoming album, and the best New Year's Eve ever.

So you're curating this New Year's Eve show. What does curating a concert entail? Oh, man, you should ask my girlfriend; she's a curator. The Knitting Factory wanted us to get all the bands together for this last night at the club, and it's been a lot of back-and-forth during a really busy time for us and the club. But it means the opportunity to have Dirty Projectors and Deerhoof play, and also our friend Greg Davis (MySpace) and our other friends like Megafaun (MySpace) play. And also, to keep an eye on what the night looks like for people and the pacing of the night.

How is this going to work in terms of set times? Are people going to have to choose between Deerhoof, Dirty Projectors and Akron/Family? You know, that's the thing that curating would normally entail but we haven't really had a chance to communicate with the club a lot about the production end of things. So I can't answer that, to be honest with you. But I imagine they'll try to stagger it a bit, you know; start one show on the hour and another show on the half hour. And we also just got two of the guys from Oneida to play; they call themselves Groover's Paradise.

What is Talk Normal? They're sort of like an electric acoustic duo. It's two women who do more abstract-type stuff.

I see. What about Infinity Window? Our friend Greg has gotten some different people to collaborate and turn the Old Office space into sort of a chill lounge, like a drone palace, where you can go and cool out for a second. So they're kind of an electric-acoustic addition to that.

Can you give us any hints about the surprises in store? I cannot at this time. I want to, but I can't.

Are we talking about surprise guests? Yes, we're kind of going back and forth with the club to try and nail this down in these last few days. They're in the midst of closing down, you know, and trying to continue to run the club in Brooklyn, and as much as everyone is really excited about this I don't think they have someone hired to just liaison for this one event.

What's the status on your next album? We are finishing mastering it as we speak. I just got off the phone with Seth, our mastering engineer, and we're just kind of going through it and working out the details on the frequencies. Things that maybe no one else will notice but that we will forever.

When will it be released? Springtime, definitely.

What's it called? We are 99% set on the title but I don't want to say it and have someone decide, That's not what I wanted.

How about a rejected title? "They Will Appear."

This is the first album you've made without Ryan Vanderhoof. How is the process now? We all really love Ryan and we miss him, so there's an element of him still informing the process in his absence, because you get so used to having things be a certain way. We made a record that we could not have made with him. With him being gone, there was a new level of us exploring things in our individual songwriting.

For instance, with Ryan, who has an amazing voice and is an amazing musician, there was a level of him being able to navigate very traditional song writing and lead vocals. All of us are able to do that, but usually when we wanted to work on something that was, for lack of a better word, more pretty, we would just use something Ryan brought in and let him inform that process more. And all of us are really good at that, so it was great thing for all of us to be able to explore different aspects of our songwriting.

There's also a really lean way that the trio plays together and I think the music is a lot more muscular. And there are some more extreme elements that came into focus because we were starting over again and trying new things. I'm really excited about it and I think this record is far and away my favorite out of the ones we've made.

Will anyone else be joining you for this gig? We'll see. At the very least, we hope to grab everybody from the other bands to come onstage and create a massive racket. I love it. I'm like, "It's New Years!" But we always joke around and say, "Happy New Year!" at our shows. At South By Southwest we had a bunch of horn players and we led everybody out into the street and had the horn players play Auld Lang Syne, which is one of our favorite traditional songs. So I guess it's like every other day for us.

Do you have a favorite New Year's Eve memory? I once went to a retreat in Michigan. It was a few years ago, and that was my best New Year's Eve ever. At midnight I was listening to Bhagavan Das, an Indian singer. It was this awesome moment between myself and some other people who are very special to me. And I like to party, but I'm not a huge partier and sometimes it's alienating for me being around people doing crack for the one night of the year, metaphorically speaking. I'm more of a guy who likes to go out of town and play banjos in the snow on New Year's Eve. So this should be a really cool challenge for me to get excited about, but I'm sure once the bass rumbles I'll be like, "Let's party!"

Do you have plans to tour soon? We will be doing some residency shows in March. Three in San Francisco at the Hemlock Tavern, then three nights at the Steve Allen Theater in LA, and then hopefully a couple nights in Toronto and Montreal. Then we're going to do a show at the New Museum of Contemporary Art in New York, which I'm really excited about. I love that place. It's a great honor for us to be asked to play there, you know?

So we're going to do that and then I think we're going to do two nights at Union Pool in Brooklyn. And, you know, I live near Union Pool and I'm always like, "Man, I don't know about Union Pool, but that back room is really great." And I don't want the guy who runs Union Pool to think I'm dissing him, it's just that I'm not really a bar guy, and whenever I walk through there I'm just trying to get to the back. And they have that fire pit there, so I'm hoping we can have a big campfire sing-a-long. That's the last weekend in March, I believe.