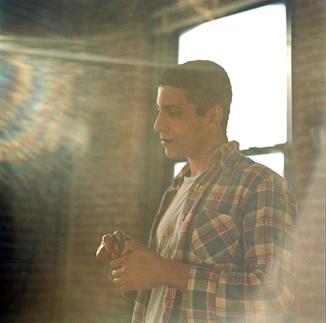 Every article you'll read about Miles Benjamin Anthony Robinson mentions what a tough life he's had...and he has. From addiction to homelessness, you can hear the experience of rock-bottomness in his voice. The likes of Grizzly Bear's Chris Taylor and TV on the Radio's Kyp Malone were amongst those who recognized his talent, and have helped him record his material. He'll be hitting the road soon, but you can catch him at Music Hall of Williamsburg this tonight, and Zebulon next Tuesday.

When did you start writing and playing music? I've always written songs in my freakishly tiny head. I started playing when I was old enough to stand up and start breaking the piano at my grandmother's.

Do you feel any particular part of your childhood led you to become a musician? Crippling shyness. Also that movie Amadeus.

Can you tell us a little about what it was like being homeless in New York? It seems even more expensive.

Are there any nights you remember distinctly from that time in your life? This album is not about being homeless in New York. Maybe if we're having a beer sometime we can bullshit about our past and tell drug stories but the repeated discussion of them in relation to talking about my music is beginning to bore me. I HAVE DONE A SHIT TON OF DRUGS AND I USED TO SLEEP OUTSIDE SOMETIMES. I ATE FOOD OUT OF THE GARBAGE AND SAVED FOUND CHANGE TO BUY MALT LIQOUR. IF YOU DON'T ALREADY HATE THIS STORY YOU WILL SOON. Oh the unshakeable stench of cliche that surrounds me.

Is there anyplace in New York you feel a particular attachment to? Or feel most inspired by? Pretty much all of Manhattan below 23rd stirs up varying degrees of wistfulness and nostalgia in me. It reminds me of being very young and really fucking open. Williamsburg is a road map of personal failures.

How often are you working on music? Everyday all the time in some capacity just about. Maybe fourteen or fifteen hours a day. Of course, I can work on a bar napkin or a scrap of two by four so it allows for a reasonable degree of freedom. It is still very unhealthy though. I have pathetically stunted social skills.

How did you come to be friend with Chris Bear and Kyp Malone...and what kind of effect have they had on your life? They told me i had potential, they said they'd make me a star. and then they took all my money and walnuts.

What bands have you been listening to lately? Pavement, Prince, Fugazi, the War on Drugs, Wild Yaks, Ponytail, Fleetwood Mac.

Please share your strangest "only in New York" story. I don't think the statue of limitations is up on that one yet, sorry. Also, really, after living my entire adult life here I find the rest of America much MUCH stranger.

Which New Yorker do you most admire? Lenny Dykstra

Given the opportunity, how would you change New York? 3-point proposal: 1. cigarettes $3 a pack. 2. rename the area north of fourteenth and west of fifth avenue New New Jersey. 3. Make it fun again. Or, alternately, make it the year 2000 and do it all again knowing what i know now.

Under what circumstance have you thought about leaving New York? Winter, summer, on the subway, when riding my bike down the same freaking street I've ridden it down the last four years.

Best cheap eat in the city. Endless Summer taco truck, Bedford and North 6th. That or Gran Morelo. Obviously any free food tastes better than either of those so...any free bbq anywhere ever.

#interview
#Miles Benjamin Anthony Robinson
#musician
Do you know the scoop? Send us a Tip