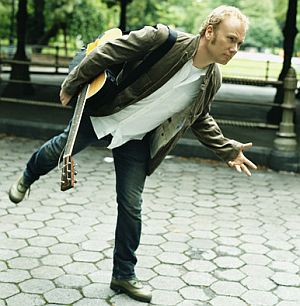 In the years since the demise of the '90s cult phenomenon Soul Coughing, Mike Doughty's been assiduously cultivating a fruitful career in the singer-songwriter mold, though he's not above sharing the spotlight with other musicians like his admirer Dave Matthews. His 2005 album, Haughty Melodic, was his first to feature a full band; PopMatters praised the album's marriage of "post-Soul Coughing singer-songwriter compositional style with the tapestry of brightly colored sounds and snarled grooves of his now-defunct, aesthetically pleasing – in other words, fly – band."

Doughty's most recent album, Golden Delicious, is a self-described exercise in "'dude theory' - the idea of making a relaxed record that sounds like a bunch of dudes playing music for the pure joy of playing." Mike Doughty's Band play The Music Hall of Williamsburg Thursday night. Tickets.

Anything to report from the road so far? We've been opening for ourselves, wearing fake beards, playing a kind of crude adaptation of John Zorn's improvisational "game pieces" called Face Calls.

Most musicians seem to hate touring – how do you feel about it? MOST musicians?! That seems weird to me. I like touring. I've been doing it for 14 years, so it feels very normal to me. I hated touring with Soul Coughing in the end, because it was such a miserable relationship. The guys I'm with now, I love them, every day is a joy.

How did your approach to your new album, Golden Delicious, differ from your 2005 album, Haughty Melodic? Haughty was made over a period of three years, parts were stacked on top of parts. Golden was made in two months, and it was mostly a live band playing all at once.

What inspired the song Fort Hood? I grew up on military bases, around adults suffering from Post-Traumatic Stress Disorder. I worry about Iraq vets and the nightmares in their heads. I feel tremendous guilt at being able to live a normal life while those guys risk their lives. Stealing the chorus from 'Let the Sunshine In' was very natural for me--I grew up with hip-hop and house music.

What’s your favorite song to play live off the new album? Girl in the Blue Dress, I think. Fast and flashy-stoppy.

Please settle a bet: My friend says your last name is pronounced Doe-ty (rhymes with Boaty). I say it’s Dow-ty (rhymes with Rowdy). Rhymes with Boat-y, my man. But my family, rooted in Louisiana, are in the minority, most people say Dow-tee. I've met people from Louisiana that I don't know (presumably distant cousins) who pronounce it the same way. Also, curiously, black people with the name all seem to say Doe-tee. Which, horribly, seems to be evidence that my family was involved in slavery.

On your solo EP The Gambler you cover The King of Carrot Flowers, a song by Neutral Milk Hotel. Why did you change the last stanza, switching the characters' roles where Dad isn't the one dreaming of death, but the mother? I didn't know I did that! I don't know. Freudian/Oedipal?

On the album El Oso, there’s a song called St. Louise is Listening. Who is St. Louise? Louise Brooks, the silent film star. 'The Eskimo' mentioned in the second verse is a real character from her life, a Parisian faux-aristocrat.

Tell us about the opening band on this tour. The Panderers are from rural Indiana – Scott Wynn, the leader, grew up in Appalachia, and is the first man in his family to not be a coal miner. He was given his own mule and plow for farming tobacco at age 15! The music is fantastic, it sounds like the Pixies at a hoedown. It's Tarantino-credits, cop-show music.

On your blog you wrote: “Every tour I resolve to do at least one rarity a night, and then I get nervous about it and abandon the plan. So maybe this time.” Is this the time? Sigh, no, it's not the time. Why did I type that? Though I do have an ever-larger repertoire each year, and there's been more rotation of songs in and out of the set because of it. I've abandoned the rarities because I decided to shorten the set length, make it faster and bang-ier. Hit it and quit it.

What have you been listening to these days? My bass player Scrap has hipped me to a lot of 20th Century classical music – Ligeti and Schoenberg. And Jose Gonzales is my go-to dude these days.

You’ve been DJing after parties on this tour. How did that idea come about?
I've been going crazy making electro-house music on my laptop – it's fun to do in my bunk on the bus. I've got about a two hour set of original music and remixes. I needed an outlet for it.

Where’s the afterparty in Brooklyn? Don't know yet! It was gonna be at the House of Yes, a loft in Bushwick (or Ridgewood? on the border), but it's kinda too far out there from the Bedford L stop. I hope they'll have me for one of their house parties in the future.

Why are you studying German? I think Berlin is where it's happening these days (though I'm unlikely to leave New York). And I think it's a gorgeous language, rhythmic and lyrical. I hope one day to sing and write songs in German. People think German is ugly because we mostly hear it being yelled by bad guys in movies. Few languages sound pretty when yelled.

What neighborhood do you live in? I live basically right between Crown Heights and Flatbush.

Pros/Cons? Space is the pro. Con is that you have to take the train to Atlantic Ave, get out, walk up to Lafayette St to get on the G (how horrible is the G! G, you are not my friend!) to get to Williamsburg/Greenpoint/Bushwick, which is where all my friends live. It's easier to get to Manhattan!

Favorite sources of food? I'm crazy about DiFara's, like everybody else, but I've decided not to go anymore. It's too aggro, all those people waiting in line. A few months ago, I went before the place opened, at 10 am, and was the eighth person in line! Nonetheless, Dom DeMarco, the old Italian guy who makes all the pizzas, gave me the first two pies of the day through the loopy logic of his pie-distribution. And I realized that was the perfect DiFara's experience and I can't top it.

If you could change one thing about New York what would it be? The forward march of the gentrification cold-front. But I keep in mind that gentrification hasn't been around forever, and is a trend, not a universal unstoppable force. How many rich jerks that want to be in Sex and the City can there possibly be in America? OK, a lot, but there's not a limitless supply. If the upcoming Sex and the City movie tanks, it will be for the societal good.

What’s the most noteworthy fan mail you’ve had? I've corresponded with Tony Hawk and Daniel Handler, aka Lemony Snicket. That's a bad-ass range right there.

Please share an unusual experience you’ve had in New York City. Last week, I was in New York for 13 hours, because I had a gig at the Highline in mid-tour--we got there right before soundcheck, and had to get on the bus to drive to DC immediately after. I ran errands in Manhattan and never set foot in my apartment. It didn't feel weird to me, and I realized afterwards that's because Manhattan is alien to me now. Sad.