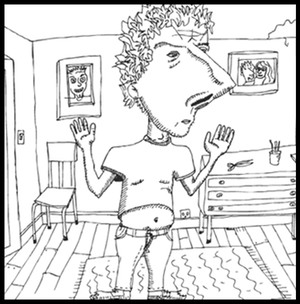 Over three years ago Michel Gondry announced that for just $19.95 you could get a signed sketch based off of any photo you submit. The masses responded to the popular and personalized item, and, perhaps unsurprisingly, some people never received their artwork. One such man is local man Dan Lee, who has been checking his mailbox for several years, never giving up hope, and never losing touch with whoever operates the MichelGondry.com helpline. Recently Lee bravely walked us through his tragic timeline:

He included a PDF of his correspondances with Team Gondry, which started back in August of 2009:

Hi, it’s been quite long while since I purchased 2 pending portraits from Mr.Gondry. I’ve given you my receipt number and re-submitted the jpegs for him to sketch. Any word?

Aug 18, 2009 Hello michelgondry.com customer, We are very sorry to inform you that due to unforeseen circumstances, and a recent change in Mr. Gondry’s production schedule, he will not be able to complete your sketch within the promised time frame. Mr. Gondry will not resume drawing personalized sketches until February 2010.

Lee kept his order and would check in now and again—on February 18th, 2010, he was told Mr. Gondry had resumed drawing portraits, though he was not told when he could expect his. More time passed, seasons changed, Dan moved from Manhattan to Brooklyn, and in 2011 he wrote again—this is the first time you begin to see a broken man, who has abandoned capital letters all together in his correspondence: "been over half a year since i asked, still waiting on the sketches. any hope?" He is told, "Michel has been extremely busy and has not been able to get to the portraits. Unfortunately we don't have an ETA when he will complete them. If you would like, we can refund this portrait order to you."

By April of 2011, Gondry began selling DVDs on his site with the promise of a personal sketch with each purchase. Outraged, Lee begins to further unravel: "still waitin' for my portraits. it's hilarious to look at the website and see things that say dvd/sketch delivery may take 8-10 weeks—try over 2 years!! serious... i've gotten engaged and moved out of the city since i first placed my order. this is just beyond rude at this point. please send my sketches so we can all can move on in life." He is given the same cut and pasted response that he was given earlier that year.

In April of 2012, Lee noticed new sketches that Gondry did and posted on his website (the sole purpose of this was likely to taunt Lee), but when he asked about his own, he was given the same exact response as he had been given the previous times—a response, word for word, now dating back to 2010.

We've contacted the Gondry robots to find out what the deal is, and also if they can tell us when we'll get our Jeff Mangum sketch.

#barts people
#dan lee
#michel gondry
#sketch
Do you know the scoop? Comment below or Send us a Tip