In Bottom of the Ninth: Branch Rickey, Casey Stengel, and the Daring Scheme to Save Baseball from Itself, Michael Shapiro writes about baseball in late 1950s and early 1960s New York City, when a city that once had three baseball teams was just left with the Yankees. Shapiro recounts the efforts of Branch Rickey, who sought to change the game of baseball with the creation of a third major league, the Continental League. While Rickey was sure that baseball owners would cooperate with his new league, the Continental League never played a single game. But Rickey's actions helped bring National League baseball back to New York with the Mets. His struggles are told alongside those of Casey Stengel, who was managing the Yankees, the American League's dominant team at the time. Shapiro is a professor at the Columbia School of Journalism and lives with his family on the Upper West Side.

Your book is largely about how Branch Rickey helped change baseball in the late 1950s with his quest to start the Continental League. Do you think that Rickey's league ever had a chance of getting started or even being successful? And, if so, do you think it could have survived until now? What killed Rickey's league and dream was not the major league owners. It was the betrayal of the men who joined his crusade. In the end, only Rickey cared about saving baseball. The others wanted only to become members of the big league club. And if that meant undermining a bold experiment that could have transformed the sport, no matter. They wanted in. For themselves and their cities. A selfish, narrow lot, the men who run the game.

Do you think it's safe to say that Rickey saved baseball with his attempts to create the Continental League? Alas, the other way around. He could have, had the grand poobahs of the game let him. Imagine, a third league, eight new teams, playing each other, pooling TV money...sound familiar. Like football. Guess where they got the idea from? Rickey saved a sport. But not the sport he intended to save.

If Branch Rickey were alive today, how do you think he would view the game he had such an impact on? What kind of changes do you think he would make? He would understand, as few have and do, that the games that truly succeed do so because there is a center, a core -- a shared purpose and belief. Baseball has commissioners but they serve at the pleasure of the owners. Rickey placed the game above all. That made him an exception, along with such rare and wise men as Bill Veeck. The others, O'Malley, Steinbrenner, always thought of their teams. Not the game. Not that they'd admit it.

Major League Baseball has so many problems right now — performance enhancing drugs and payroll inequity to name two — do you think baseball in its current form needs saving? I don't really believe that baseball can save itself; but that doesn't mean the game is doomed. It will continue to rumble along, as it always has, without a guiding hand, or principle or sense of common good. The game transcends the men who run it. Always has. Always will. 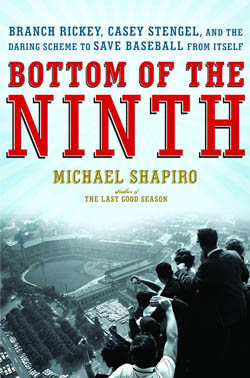 Baseball was truly was 'America's Pastime' at one time and was also America's most popular sport at one time. Is there any chance that baseball could regain that title? Or has television watching become our pastime and football become the nation's favorite sport for good? I think that moment is gone, and not necessarily because of television. Baseball is, and really always has been a local sport, with less interest in what is going on in other towns. Football, quite cleverly, used television to transform itself into a national game by broadcasting not only local games, but on the second Sunday afternoon game, building interest in the fortunes of faraway teams that caught the public's interest. The Cowboys became, gulp, America's Team. And they played in Dallas.

It seems like nobody is safe from being linked to PEDs — Alex Rodriguez, Manny Ramirez, and the list goes on and on — at what point do you, as a fan say, "it's too much, I'm done." Or do you take an approach where you ignore the drugs because every team seems to have someone that is using or has used in the past? Baseball has always been afflicted by scandal, cheating, rank stupidity, and for too many shameful decades, racism. Yet the game survives. It will survive the steroids scandal because there is a mystery and magic to the game that cannot be destroyed.

If you were the commissioner of Major League Baseball, what would you change (assuming no union issues)? I'd want to actually be in charge. Like the commissioners of other sports. The owners run baseball. Always have. Somehow the game survives them.

New York was a three-team baseball town until the Giants and Dodgers left for California. Do you think the city could ever support a third major league team again? Or would the Giants and Dodgers still be here if Horace Stoneham and Walter O'Malley didn't move their teams? I still like to think that had someone other than O'Malley owned the Dodgers, that Sandy Koufax would have pitched in Brooklyn, and that the team would still be in town. But then, if Robert Moses hadn't stood in O'Malley's way, the Bums would be playing on the corner of Flatbush and Atlantic. Life ain't always fair.

Who would you say is the Branch Rickey of our era? Billy Beane. Theo Epstein. Mark Shapiro (no relation!) Omar Minaya transformed my Mets. Lots of wise heads. Fewer back then, when owners saved money by being their own very unsuccessful GMs -- like Calvin Griffith's Washington Senators.

How do general managers like Billy Beane and Theo Epstein stack up to Rickey as a GM? Different game. Different business. Rickey's success rested on his hoarding talent -- Dodger spring training camps were so crowded that players had three-digit numbers. But Rickey could spot talent in an instant, especially if a player showed what he called "adventure" on the base paths. He never loved the home run.

Can you see the Mets or Yankees, with their sparkling new stadiums, ever making NYC a one-team city again like it was in the late 50s and early 60s? Remember, in the 50s New York was a three-team city -- Yankees, Dodgers and Giants. In 1958, with only the Yankees in town, attendance at the Stadium dropped.

Have you been to the two new stadiums? What are your thoughts on how they compare to the fields they replaced? Only on TV. I'm heading to Citi Field on Wednesday and am excited about entering a ballpark with a rotunda. I missed Ebbets Field and never got over it.

What's the biggest thing you'll miss about the old Yankee Stadium and Shea Stadium? I remember the old old Yankee Stadium, which was big and dark and filled with pillars. The newer one had upper deck seats on an incline so steep they'd challenge a Sherpa. Shea was as unique as a highway strip mall. All I'll miss are the memories of being there with the company I kept. The places are immaterial.

What are your thoughts on how the Mets organization paid tribute to the Dodgers and Ebbets Field in their design for Citi Field? Do you think it overshadows the Mets own franchise history, as some people have complained? They already have. The park is a replica of Ebbets Field. Except, alas, it's in Queens.

What's your fondest baseball memory? First game at the Polo Grounds with my dad and my brother. Mets v. Dodgers. A kid tried to get Duke Snider's autograph by hanging it over the grandstand railing. Duke tied the string to a water cooler.