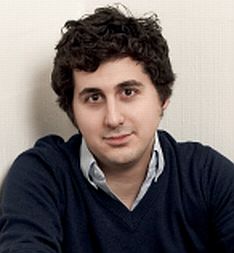 For their fourth full-length album, BITS, Oxford Collapse reportedly wrote over 30 songs – more than twice as many as they needed. "The economy has been bad, so we decided to write more songs," explains Michael Pace. It was originally assumed that BITS, their second album on Sub Pop Records, would be a double album, but in the end 13 tracks round out the CD, to be released on August 5th. One song, "The Birthday Wars" is on the band's MySpace page for your listening pleasure; the others can be sampled tonight when they play a hometown gig at Southpaw. The band's live show is a total blast, bursting with mean hooks and propulsive guitar work; their set at McCarren Pool last summer was the sleeper hit of the summer. Tickets cost $12 and also get you sets from Frightened Rabbit and The Lame Drivers.

Your new album BITS will be released next month. How do you feel about it? We feel BITS is the culmination of everything our band is supposed to be about. Hopefully it will make you laugh, cry, jump up and down, make you hungry and thank your parents for being alive.

If BITS was a meal, what would it be? Buffalo wings with an endless supply of carrots, celery, and homemade blue cheese.

How’s the tour going so far? The tour has been great. Frightened Rabbit are an amazing band and great guys. Among other things, we’ve witnessed a dog fight in Madison, had the actor who played Little Man Tate come to our show in LA, ate amazing BBQ in Mobile, Alabama, swam in Barton Springs in Austin, saw The Happening in Eureka, CA, went to an alligator farm in East Texas… and that was all in the first two days!

Did you hang with your MySpace (and real life) friends the Joggers in Portland? We most definitely hung with the Joggz in Portland. They are riding fixed-gear bikes listening to boomboxes, driving around in pizza delivery trucks painted like Eddie Van Halen’s old Hamer guitar, and looking for a new label. Their new jams are amazing!

Favorite venue to play in New York? Some of our most memorable shows have been in more unconventional spaces like the Glasslands and some kid’s loft on West 4th street next to the McDonald’s. Those type of shows tend to be way more fun than playing regular clubs.

Least favorite venue? Thankfully none of these seem to exist anymore, but we’ve played some terrible shows at places like Acme Underground and Scenic in the East Village.

What’s the toughest gig you ever played and why? We played the worst show of all time at some shithole in Dayton, Ohio. My amp died in during our second song, the local bands were dicks, we basically got into a fistfight with them and we were pretty much run out of time. Looking forward to going back.

What neighborhood do you reside in? Pros/Cons? We all currently live in Greenpoint, Brooklyn. Pros include lots of friends, Polish people, and scenic views of the New York city skyline. Cons include no movie theaters or functioning bath houses.

If for some tragic reason you couldn’t live in New York City, where could you see yourself calling home? Interesting you should ask this as I’m planning on moving to Austin, Tejas in the fall to be with loved ones and have some fun in the sun. I’ve lived in New York all my life, so I’m looking forward to a change of scenery. Other than Austin, maybe northern California or Cody, Wyoming.

How is moving to Texas going to affect the future of Oxford Collapse? Moving to Texas won't affect the band in any way, other than we won't be playing shows in New York every week. I'll be based out of Austin and I'll met up with the other guys to tour and record.

What’s the most unusual fan interaction you’ve had? Multiple people have told us that they’ve had sex to our records. That, and signing girls’ jeans (or dungarees, as my grandma calls ‘em).

What’s the worst fight you’ve ever weathered with your bandmates? (Details!) Said show in Dayton resulted in near fisticuffs, but ultimately wound up with our bass player slipping in a puddle of beer and breaking his nose.

Are there any other genres of music you’d like to explore besides rock? One day I’ll make my solo record that’s just me, my mandolin, and a penny-whistle.

Have you been approached to license any of your music for advertising?
We have been approached by a few ad agencies, but nothing has come through as of yet. Tell us where to sign and the song is yours.

Got a good ‘only in New York’ story? A few months ago I saw Ralph Lauren standing on a street corner underneath scaffolding looking confused. He was wearing parachute pants with tassles and I thought he was homeless at first. I also saw Lee Ranaldo from Sonic Youth on the Long Island Rail Road. We were both going home to visit our moms on the Island for Mothers Day.