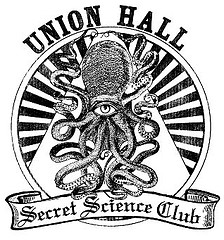 The Secret Science Club may be the best kept secret in New York. Forget your typical night of drinks, music or being parked in front of your tv for the latest Project Runway episode. Head over to Union Hall for some science! Each event brings out the inner-nerd in all of us, and recently we asked the founders a few questions about their brainchild. The next event is December 5th, which gives you a week to study up.

What do you do when you're not working on Secret Science Night? How did you get interested in the field?
Dorian: I'm an acquisitions editor for technical science books, interview scholars and scientists for special podcasts, host karaoke, and throw parties. I'm also the host of a radio talk on WFMU called the Speakeasy.

Michael: Margaret and I write about natural history. Our most recent book is "Carnivorous Nights: On the Trail of the Tasmanian Tiger," which is about our search for an extinct marsupial predator.

When did the Secret Science Club begin at Union Hall?
Margaret: In July 2006, we started talking with Andy Templar and Jim Carden, the owners of Union Hall, about having a special event there. We went in while the bar was still under construction--and it looked like a funky Masonic hall or explorer's club. And then somebody--I think it was Andy--said totally off the cuff, "Wouldn't it be great to have a science night here?"

Dorian: When Andy mentioned wanting to do a science night, I told him I had wanted to do science brunches back when I had started a nonprofit (for public understanding of science). I thought it would be quite simple to get some well-known scientists to agree to give talks, since I had had success in getting them on my old radio program and involved in various other projects I've worked on. It seemed something that, between Margaret, Michael, & I , we should have been able to put together without too much trouble.

Michael: The first Secret Science Club was in September 2006--and we've been having events at least once a month since.

Did you secretly meet elsewhere prior to UH?
Michael: We can only tell you if you give us the secret handshake.

How does each event come together?
Margaret: Everything is centered on the scientist of the night--and their subject matter.

Dorian: We've had chemists, marine biologists, neuroscientists ... I usually book the speakers, and we tend to do this several months in advance (with a few exceptions). Margaret does the music mixes, our friend Alexis Gambis has started doing film montages, Michael rounds up the people on our mailing list. I think that Andy and the bartender (usually Laura) concoct what will be in the drink of the night. Some are quite conceptual.

Michael: We prepare an alchemical mix of sounds, sights, sensational cocktails, and science. And occasionally we have experiments.

Briefly, what can people expect at this week's event?
Margaret: Dinosaur hunter Michael Novacek is coming to the Secret Science Club on Wednesday, December 5. He's lecturing on evolution and extinction from a paleontologist's perspective. So in 45 minutes, the audience can expect to cover 100 million years of the Earth's history.

Michael: The cocktail of the night is the "Hungry Hyena," which is a reference to Dr. Novacek's narrowly escaping being eaten by an oversized hyena in the Sahara desert.

If you could have your ultimate dream event, what would it include (who? where? the topic, the special cocktail, etc)?
Michael: He's dead--unfortunately--but I would have loved to have Stephen J. Gould speak. I think he would have appreciated the atmosphere. The drink of the night? A Punctuated Equilibrium!

Dorian: I'd love to have something like a debate, with two opposing but not warring scientists, and a dance party afterwards, with live music. Oh, and plenty of food available during the night!

Margaret: Is Einstein available? Then we could have "Einstein on the Beach" as the cocktail.

Have you been surprised at the popularity of a science night in New York?
Michael: No! New York nightlife has everything: live music, comedy, burlesque, literary readings. But no science. The Secret Science Club just filled a need.

Margaret: We've been surprised a few times by the crowds. We've had a couple of Nobel Prize winners come to speak--and in one case we had to turn away more people than got in. People say that's a good problem to have, but we'd like everyone to get in. Science for the masses!

Dorian: No, even several years back, when i did my science radio program on WFMU, I could tell that many people who had absolutely no training in or contact with science found it very interesting when introduced to it casually.

Please share your strangest "only in New York" story.
Dorian: There are so many! Every day there is something new & strange in New York. Come to think of it, that makes the whole concept of science talks presented in a bar becoming a big hit nothing out of the ordinary.

Michael: We've been having these taxidermy contests every year, and they get pretty strange. You know how a deer's head is mounted. Last year, a contestant brought a pigeon's head mounted on a small board. It caused a stir. It was the ultimate in New York taxidermy.

Margaret: It doesn't get much weirder than that, except at this year's contest, we had a dead stuffed squirrel dressed as the pope. The skeleton of a "two-faced" cat. And a deer-hoof that was purportedly used as a murder weapon.

Which New Yorker do you most admire?
Dorian: Thelonious Monk; no one else even comes close. He wasn't born here, but came at a very early age.

Margaret: John McPhee. His books and New Yorker articles about geology inspired me to write and think more about science.

Michael: Specimen number 35866 at the American Museum of Natural History. It's a taxidermy of a Tasmanian tiger. It's not a native New Yorker, but it has "resided" in Manhattan for 88 years.

Given the opportunity, how would you change New York?
Michael: Every high school student would learn about the bedrock (and glacial till) that underlies the city. Plus, in order to graduate, students would have to identify 10 street trees and 10 species of birds.

Margaret: A bigger budget for "non-essential" subjects in the public schools, such as music, art, and--of course--science.

Dorian: Better public schooling, as Michael & Margaret said. Fewer high-rise condos and banks - there are blocks which are taken up entirely by banks. New York has lost much of its character. We need more mom & pop stores, and of course, Times Square was better even when it was a seedy dump. Everything is a chain store now.

Under what circumstance have you thought about leaving New York?
Dorian: If Giuliani gets in as president. I'm going to have just get out of the US if that happens...

Michael: When the Brooklyn Bridge is submerged by rising seas caused by global
warming, then I'll leave.

What's your current soundtrack to the city?
Michael: I"m listening to the soundtrack to the Secret Science Club's night on global warming featuring Billy Idol's™s "Hot in the City" and Curtis Mayfield's "Future Shock."

Dorian - All of Margaret's mixes are very NYC, in addition to being very "science.'

What's the best subway line?
Michael: The F train--not only because it goes to my neighborhood--but because it has the highest station in the city: Smith and 9th Street.

Margaret: The A line over Jamaica Bay--fantastic view.

Dorian: I like the 2 or 3 line because they usually are running somewhat normally on the weekends (whic is more than I can say for the R). And on weekdays, they're fast.

Best cheap eat in the city.
Dorian: There's a Pakistani place on either West Broadway or Church, down near Chambers St.

Margaret: A Jamaican pattie washed down with Ting on Flatbush Avenue