One of the most memorable—and gory—scenes from 1990s cinema is when Michael Madsen, as Mr. Blonde, tortures a cop in Reservoir Dogs while dancing to Stealer's Wheel's "Stuck in the Middle with You." At the Tribeca Film Festival on Friday night, Madsen reveals that he was "intimidated" by the scene and never rehearsed it.

The film, which is celebrating its 25th anniversary, was screened at the Beacon Theater before a chat with actors Madsen, Harvey Keitel (Mr. White), Steve Buscemi (Mr. Pink), Tim Roth (Mr. Orange) and, of course, writer-director Quentin Tarantino. Tarantino gleefully recalled all the walkouts from the extremely violent movie—"Wes Craven walked out of my movie. The guy who did Last House on the Left walked out of my movie! I guess it was too tough for him." 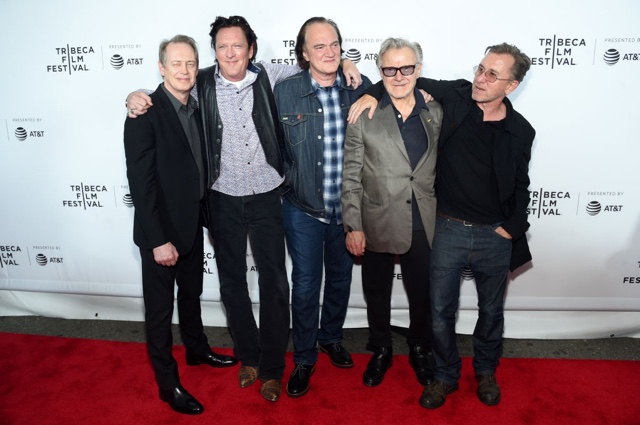 As for the dance, Madsen confessed his fears—and inspiration—for it. From Entertainment Weekly:

“You never made me do it in rehearsal because I was so intimidated by it. I didn’t know what to do,” Madsen recalled. “In the script, it said, ‘Mr. Blonde maniacally dances around.’ I remember specifically that’s what it said. And I kept thinking, ‘What the f— does that mean? Mick Jagger?'”

Tarantino said the entire scene was done in three takes, but Madsen’s dance occurred during the first.

“I didn’t know what the hell to do. I heard that music and I said, ‘Oh f—, I better do something,'” Madsen said. “I remember thinking about Jimmy Cagney. I remember this weird little thing he did in a movie I saw. He did this crazy little dance thing and it just popped into my head at the last second. That’s where it came from.”

Madsen added, "I went to Michigan to open up this theater. They were going to name it for Michael Madsen. And I thought it was great. They sent me a memo of what I was supposed to do and it said, ‘First we’ll announce the naming of the theater and then Michael Madsen will come out doing the Mr. Blonde dance.’ I was like, ‘Oh my God! There is no way I’m going to do that.’ I started imagining myself at 80 years old, someone asking me to do the Mr. Blonde dance. It’s been following me around forever."

Here's the dance—warning, the scene is VERY graphic:

#michael madsen
#quentin tarantino
#reservoir dogs
Do you know the scoop? Comment below or Send us a Tip