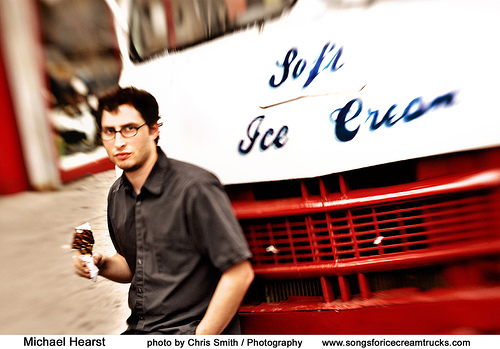 Michael Hearst, of Brooklyn book-rock collective One Ring Zero, is the man behind Songs For Ice Cream Trucks. As such, he has single-handedly reinvented the timeless sound we often hear on the street during the summer, some with a tinge of nostalgia, some sprinkled with noir and all leaving you wanting seconds.

Do you ever approach random trucks and give them your cd?
Actually, I have on a few occasions, but it usually turns out to be fruitless. For some reason I tend to be drawn to the least likely candidates—disenchanted old men who barely speak English and stare at me with utter confusion as I hand them my CD. "Seriously, you can play this on your truck. I'm giving it to you for free. It'll sound good, I promise!" For the most part, the ice cream trucks that have been using my music have all approached me, and very few of them are in New York. It seems Mr. Softee has a bit of a stronghold here, with their trademarked jingle. But that's fine, the album wasn't really written for just ice cream trucks. It's also supposed to be a fun album for anybody to listen to at home, in their car, at the office, wherever. It works especially well as a children's record.

What instrument do you think is best for an ice cream truck song?
In my opinion, for both practical and aesthetical reasons, I'd say high-end instruments seem to work best for ice cream truck music; things like the glockenspiel, accordion, various chimes, bells, etc. The speakers on most ice cream trucks are generally quite small, therefore it's important not have music that's going to sound distorted when played. Also, high-end sounds carry much better through the air and can be heard for several blocks, which is sort of the whole point, right? It was also my intention to write songs that were in the vein of what we already think of as ice cream truck music. I didn't want to totally go off the deep end and write a bunch of music that wouldn't make any sense coming from an ice cream truck, ie. heavy metal, rap, punk-rock. That said, I did write some fairly complex songs that have several key changes, diminished chords, and other geeky elements. I also used some rather unusual instruments
like the Claviola and theremin—instruments that I use quite often with my regular band, One Ring Zero. In fact, the music is not all that unsimilar to the stuff you would hear on an ORZ record. It's just a bit dumbed-down, perhaps, simpler and not as poppy.

Are you doing any collaborating with Matt Allen, the Ice Cream Man?
Yes, Matt has become a really great ally in this whole ice cream adventure. He first contacted me about a year or two ago after seeing my myspace page. I sent him some of the early demos, which he began using on his truck. Whenever he's in New York, we team-up on things: giving away free ice cream, and promoting "Songs For Ice Cream Trucks." Good times! 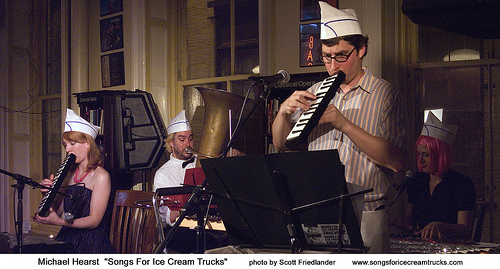 Do you have a favorite treat to buy from the truck?
When I was kid, growing up in Virginia Beach, I used to run after the truck with two fists full of change, and I'd buy as much as I could afford. Aside from ice cream, the trucks down there also sold candy. I remember buying things like jawbreakers, lollypop rings, and Fun Dip. I'd bring it to school the next day and compare with my friend's stash. Truth be told, at this point, I rarely buy anything from ice cream trucks. I've become too much of a food snob. The ice cream that is generally being sold from trucks is stuff that I really don't want to eat too often. Not sure what that stuff is, but I'm fairly
certain it's not really ice cream. We need people like 5 Boroughs Ice Cream or Ciao Bella to start selling from ice cream trucks. Then I'll be happy.

Please share your strangest "only in New York" story.
Well, I don't know if this is an "only in New York" story, but here goes: I actually work one day a week at a small pasty shop in Park Slope called Colson Patisserie. It allows me to get away from my computer and music for a little while. Plus, they sell homemade gelato… and copies of my CD. Anyway, one afternoon it was really crowded, and there was this long line of people waiting to get coffees. As I approached the next lady in line, I noticed she was staring at my "Songs For Ice Cream Trucks" CD, which was on display by the register. She looked up at me and said, "You know, I was stuck in
traffic the other day and was listening to the radio, and I happened to hear the guy who made this CD being interviewed. And I was thinking to myself, 'what kind of person has the time to sit around and write an entire album of songs for ice cream truck??'" I shook my head at her and said, "Man, whoever that is must be a complete moron!" She rolled her eyes in agreement. I then took her order, and went off to make her a double latte, or whatever.

Which New Yorker do you most admire?
I think I mostly admire New Yorkers who have achieved some great level of success, but still live their lives just like the rest of us. It always makes me happy to see David Byrne fly by on his bicycle, or hear about John Turturro shopping at the food coop, or even Mayor Bloomberg riding the subway for that matter. But I'm not sure who I admire the most. Right now I'm reading a book about Abraham Lincoln. We need a New Yorker like him. They just don't 'em like Abraham Lincoln anymore. I really admire a lot of my close friends, but then I guess that's whey they are all my friends, because I admire them.

You've taken a step towards changing the ice cream truck sounds that we all hear on the street...given the opportunity, how else would you change New York?
Wow. Do I really get to answer this? So many things. Lets see. I'm all for the flat fee traffic plan in Lower Manhattan. Way too many unnecessary cars in this city! Especially dumb-ass SUV drivers trying to double-park on 6th Ave. Like many Brooklynites, I'm also very anti Ratner. What else…. Trash! What's up with people blatantly dropping their trash on the sidewalk. I've seen people do this right in front of a police officer, and the officer did NOTHING! Also, it would be nice if fire engines and ambulances could turn down their sirens just a little bit, please? Come on, ice cream trucks aren't allowed to play little jingles while holding still (which, by the way, I think is a very good compromise), but Harley Davidsons and fire engines can race down a street blasting 150 decibels of noise, setting off every car alarm on the block. Oh, and that's another one: car alarms! What's the point? Can't we just outlaw those things all together? I mean, they make sense if you live in rural Idaho or somthing. But who's really gonna do anything about a car alarm going off in New York City? Okay, that's my kvetching for the day.

Under what circumstance have you thought about leaving New York?
Nuclear warfare. Dirty Bomb. But then it would probably be too late, wouldn't it? I think the only way I would leave New York at this point would be if all of my friends moved with me.

Do you have a favorite New York celebrity sighting or encounter?
For some reason, I rarely have celebrity sightings. I think I just don't notice people so much when I'm walking down the street. Also, I'm pretty out of touch with all that stuff anyway, that is, who the big celebrities are these days. But just to make everyone happy, here's a story: Back when One Ring Zero was performing off-Broadway with the Pumpkin Pie Show, Macaulay Culkin would come to see us once in a while. After the shows, we'd all go back to his apartment and play video games and skateboard around the living room. His brother Kieran would perch himself like a bird on the armrest of the couch, wearing black, fingerless gloves, ala Michael Jackson. I remember Macaulay had a "Home Alone" doll of himself sitting on the kitchen table. It was all so surreal and hilarious.

Best cheap eat in the city.
I'm a big fan of Bánh mì (aka the Vietnamese Sandwich). My favorite place to get Bánh mì is at Ba Xuyen on 42nd and 8th Ave in Sunset Park. I'm still waiting for someone smart enough to open a Vietnamese sandwich shop in Park Slope. They'd make a million dollars on me alone. In fact, I actually considered opening one myself.

Best venue to see music.
Barbès in Park Slope, of course. And not just because I'm good friends with the owners, or because One Ring Zero is on Barbès Records, or because there's a big banner of ORZ permanently hanging in the back. Seriously, where else are you going to see Tuvan throat singers one night, Madeline Peyroux the next, and then Les Primitifs du Futur, all in a small, intimate room with only a tip jar being passed around?

Mets or Yankess?
I grew up watching guys like Daryl Strawberry play for the Tidewater Tides (former farm team for the Mets), and I was also born in St. Louis where my father and grandfather were huge Cardinal fans, therefore it would only make sense that I'd be a National League guy and fan of the Mets. However, I find it difficult to only root for one team. Perhaps I'm a bit fair weathered, but I tend to root for whichever New York team is doing best. Ultimately, I just want to win.