Michael Cohen Gets The Crappy Subway Ads He Deserves

Earlier this week, fake ads for Michael "The Fixer" Cohen started popping up in the subway system. It was a clear knock at the unflinchingly loyal personal attorney to President Donald Trump, Elliott Broidy and Sean Hannity, who is currently being investigated by the FBI.

The ad was first reported by amNewYork when a reader sent the paper a photo of the ad on an N train. They noted that "whoever is behind the prank ad was thorough... the phone number is active, with an automated system that allows you to press one 'if you need hush payments made,' press two 'if you need to threaten someone with physical violence' and press three 'if you're the president of the United States.'"

We were able to track down the person behind the ads, who spoke to us under the promise of anonymity and said the phone number had been "ringing almost non-stop since [Thursday] morning." 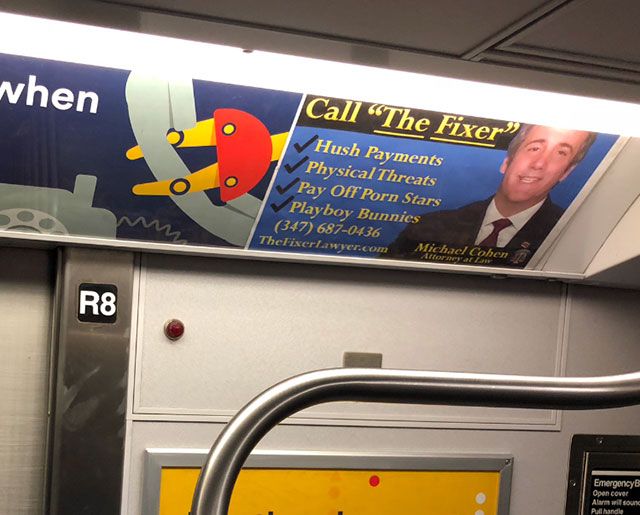 Courtesy of the artist

While the MTA said they were removing the fake ad, they haven't found them all yet. We've been told "there are quite a few up so be on the look out for them."

We were also told there is more on the way, though it's unclear what that will look like—the person behind the ad told us on Friday morning, "We are not finished making fun of Michael Cohen. We're not sure if it will be another subway ad, but TheFixerLawyer.com is just getting started."

Why Cohen? "It's just crazy that the PRESIDENT OF THE UNITED STATES has this guy to be his lawyer. Michael Cohen just seems like the type of lawyer who would have a shitty subway ad. It's 2018, so I wouldn't be surprised if he steals the concept and starts posting these exact same subway ad in earnest."

While you might automatically want to associate these Cohen parody ads with the ubiquitous Cellino (and Barnes) ads, the inspiration actually came from another famous subway legend: Dr. Zizmor. We were told, "Dr. Z is an inspiration to all New Yorkers, so I think we definitely had his ads in mind when we put this together."

To learn more about the real Michael Cohen, listen to this episode of Trump Inc.

This was previously published on the Gothamist newsletter on April 20, 2018. Don't miss stories—sign up for our newsletter here.

#fake michael cohen ad
#michael cohen
#subway
#subway ad
#original
Do you know the scoop? Comment below or Send us a Tip