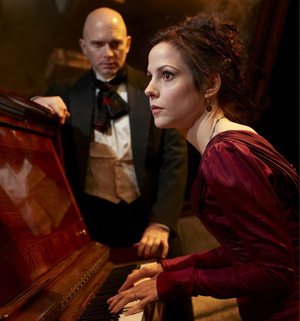 What do you think is behind Hedda's destructive behavior? I think, especially lately as I've been listening to the play every night... There's this scene where Judge Brack says to her, "Maybe you just haven't ever been challenged." And she says, "I've never had to take anything seriously." She's a woman who's had a privileged upbringing, who's too independent and intelligent for the society that she finds herself in. But then so is Thea, who is bold enough to stand up and take action. The truth of the matter is that Hedda's kind of a coward, and would rather destroy herself and the people around her than actually do something about it. The truth is she hasn't faced anything really challenging, I think. That's what it seems like to me; I'm sure Mary-Louise would have an entirely different answer.

Have you worked with her before? No, we've known each other through friends and we've met before, but no, we've never worked together before. It's terrific; we have a really great relationship onstage, and a really good connection to each other. It's been one of the more exciting things, working together, mapping out a real relationship between these two characters. And you know, she's constantly surprising, inventive, and interesting. So every night, you're never quite sure where things are going to go, and she very much likes to have the same thing from the people around her. It means that you get to play and discover stuff every night, which is really great.

And Paul Sparks, he's brilliant.
Yeah, he's fantastic. I've been watching him in shows for years. I've always really admired him and was really excited when I found out he was playing Lovborg. I knew him a bit socially before, so it's been really great kind of hanging out with him. I think he's a fantastic actor, and I'm really glad he's coming to a lot of people's attention who may not have known of him before.

Is this his first Broadway show? No, I think he did Take Me Out on Broadway as well, but that was the only other play. And then Ana Reeder, who's a terrific actress and I've done some readings with before. She's really great, and of course it's fun to be in the company Peter Stormare... I had seen The Big Lebowski, and Fargo, but there was this Keanu Reeves movie Constantine where he played Satan, and I didn't realize that it was the same actor until we started working, but that was one of my favorite out-there, comedic, terrifying portrayals of Satan in a movie that I've ever seen, and I always thought, "Who is that guy?" It's fantastic how he's out of his mind in the best possible way.

It must be fun working with him. It is, and we get to have this great 10, 15 minute scene where Hedda and Lovborg are feeling each other up downstage.

It was so fun watching you two during that; just the way he holds his cigarette was really cracking me up. Yeah, it's great; we have a whole little play going on up there.

Do you prefer doing musicals over straight plays? No, in fact I never intended to do musicals, I got sort of backed into it through Tommy. But I've always done straight plays and expected that's what I would always do, but I've been really grateful for the musicals I've gotten to do, especially the Sondheim. But I wanted to sort of remind people that that wasn't always all I did, and I'm very glad that in the last few years I've gotten to do more straight plays. I really enjoy just doing straight theater. It's nice also just not having that pressure of having to worry about what condition your voice is in all the time.

Jeremy Piven is getting a lot of attention for dropping out of Speed-the-Plow. What do you make of all that?
I haven't heard the most recent fallout from it. For one thing, I try not to spend a lot of time following gossip winds, probably because I know that the real story is seldom what you're reading, so I honestly don't know much about it. I do think that David Mamet's quote about the whole situation, that Jeremy had decided to give up a career as an actor to start a career as a thermometer... That was one of the funnier things that came out of it.

Have you ever had to drop out of a production? No, I tend to be the kind of guy who, unless I've lost a limb, I'll show up to work. I've performed with bronchitis, and cracked ribs, and any number of stomach flues. It's a real drag for my understudies; people who get jobs as my understudies pretty much realize that they're going to be backstage for the whole run.

And what's next after "Hedda" closes? At this moment I'm not sure; the one thing I know is this movie called Cirque du Freak, which was shot down in New Orleans. It's based on a series of kids books, with John C. Reilly and Salma Hayek and Willem Dafoe. It's directed by Paul Weitz. It's a kind of Harry Potter with vampires. There's a traveling freak show with a bunch of vampires, and a couple of high school kids get mixed up in the whole thing. I play Mr. Tiny who's the 400 pound evil mastermind of the whole thing, the bad guy that even the bad guys are afraid of. So that meant hours of prosthetic makeup and a fatsuit and living in New Orleans for four months which was just a fantastic experience.

That sounds awesome! I haven't seen it yet, but it has all the elements to be a great, great thing.

What neighborhood do you live in? I guess technically I'm in the Flatiron district. I love it down there; I've been there probably for twelve years now, so I've seen it change enormously. I love how accessible it is to the rest of the city, I have a dog, so I love how I can walk her to work in Midtown, walk her to work down at the Public, and I actually love Madison Square Park, and the Flatiron building, and just that whole little section there.

Finally, what's the weirdest fan interaction you've had? It's funny, it seems to have changed over the years, back when I was doing Tommy, there would be gaggles of high school kids around the back door. Then there was a woman who tried to invade into my car; she just kind of opened the door and sat in it before I got in, and luckily the driver and some theater security people asked her in a firm but kind way to get the hell out of there, and then she proceeded to bang on the windows as we drove away. That was kind of baffling. But for the most part, people are really just respectful and nice.

I don't do the kind of shows that encourage the read rabid fans, I mean Hedda Gabler doesn't really have a bunch of people wearing Ibsen T-shirts or anything. You always wonder a little bit if someone is drawn to you because of the character they've seen you play, and if that character is a transsexual with a bad post-op condition or when you're a murderous barber, if that's the sort of thing drawing people to you, you kind of have to maintain a little caution when meeting them afterward.

#hedda gabler
#interview
#Michael Cerveris
Do you know the scoop? Send us a Tip