Last fall, lawyers for musician M.I.A. revealed that the NFL was suing her for $1.5 million because she displayed her middle finger during the 2012 halftime show. Now the NFL wants $15.1 million more!

According to the Hollywood Reporter, that $15.1 million the NFL is demanding is what the league considers "'restitution' as the alleged value of public exposure she received by appearing for an approximately two minute segment during Madonna's performance. The figure is based on what advertisers would have paid for ads during this time." Naturally, M.I.A.'s legal team says, "The claim for restitution lacks any basis in law, fact, or logic."

The NFL has argued that M.I.A. sullied its brand, but the most recent arbitration papers filed by her team points out the league allows "profane, bawdy, lascivious, demeaning and/or unacceptable behavior by its players, team owners, coaching and management personnel and by performers chosen and endorsed by NFL to perform in its halftime shows." From the Hollywood Reporter:

For example, there's Michael Jackson's performance at the 1993 Super Bowl halftime, where the singer grabbed his genitalia while singing "Billie Jean."

"This was NFL's first foray into salacious performances in their Halftime Shows," says M.I.A.'s arbitration papers. "Discovery will demonstrate that NFL was fully aware that Jackson was going to engage in such 'genitalia adjustments' in his performance."

Then, there's Prince's performance at the 2007 Super Bowl halftime show.

"During part of his performance, he was illuminated against the backdrop of a billowing sheet of fabric to project a huge shadow of himself," M.I.A.'s legal papers say. "His oversized shadow was shown caressing the neck of his stylized trademark guitar…as if stroking an erect oversized phallus in a manner reminiscent of Jimi Hendrix performances where he fondled his guitar's neck. Discovery is expected to confirm that NFL knew in advance exactly what would be presented, from pre-game rehearsal and from the stage set configuration." 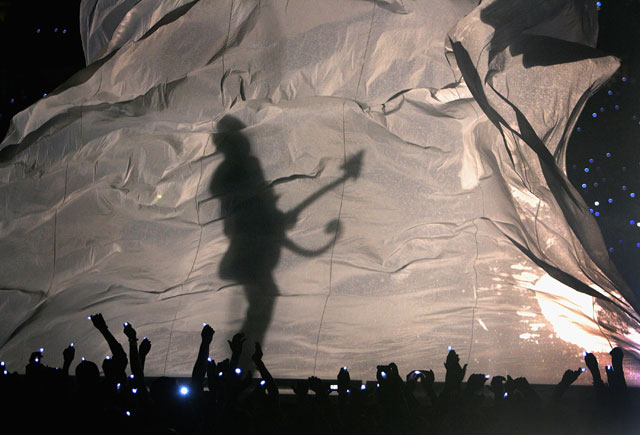 Instead, M.I.A.'s lawyer blames the league, noting other instances of bad behavior (racial slurs; racist bullying) and also NBC, which didn't use a five-second delay! This $16.6 million from M.I.A. would certainly help the NFL reach its revenue goal of $25 billion (it makes $10 billion now) plus it's putting their lawyers to work, so why would the NFL back down?

#halftime show
#M.I.A.
#middle finger
#nfl
#super bowl
Do you know the scoop? Comment below or Send us a Tip