Metropolitan Museum Of Art Offers $18 Groupon, Even Though Admission Is Free

Yesterday we were tipped off to this Groupon deal, which ends in a couple days due to a "limited quantity available." The deal offers an "$18 Admission for One to The Metropolitan Museum of Art (Up to $25 Value)." Of course, the museum's admission fee is actually just "recommended," something they have been hiding in fine print for so long that it's put them at the center of two lawsuits, which claim that the venerable institution is defrauding visitors. They even sell tickets online. 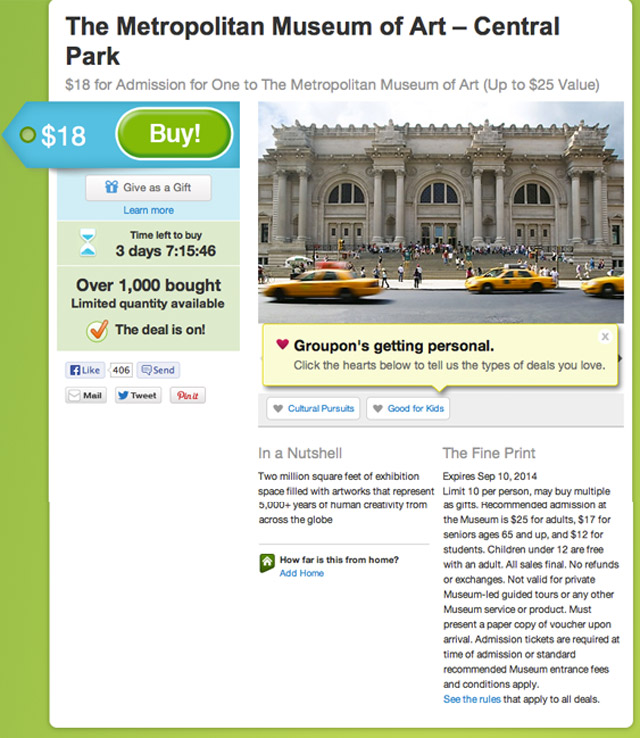 Lawyer Arnold Weiss, representing plaintiffs in one of the lawsuits, tells us the coupon is a "continuation" of the museum's "deceptive" tactics. He said, "It's a violation of the statute that requires free admission to the museum five days a week and the lease that requires four designated free admission days." Weiss doubted that many Groupon customers would even read the part about the recommended fee, calling it "highly deceptive advertising." 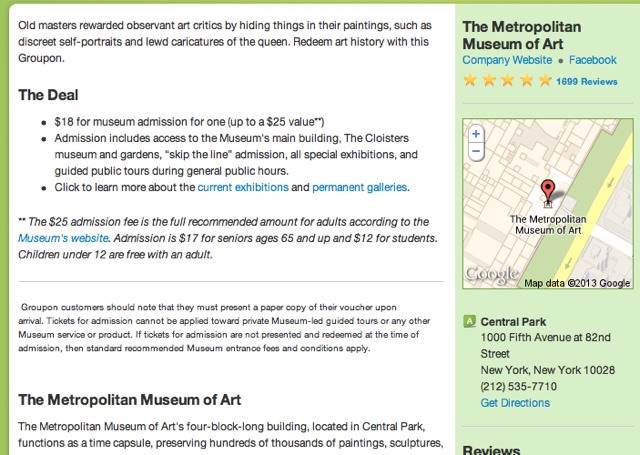 We asked the Metropolitan Museum of Art for comment, but have not heard back yet. Previously, spokespeople have called the lawsuits "frivolous" and a "nuisance," insisting that the city changed its policy to allow them to charge a pay-as-you-wish fee. However, a former employee claimed that visitors were intimidated into paying, with security allegedly throwing out visitors who didn't want to pay anything.

Earlier this year, museum director Thomas Campbell stated in a message, "The fact is, even if future Museum admission rates were fixed at $25, the Met would still be underwriting the expense of every visit, which on average costs the institution more than $40... It might be noted that many New York museums operating under similar pay-what-you-wish policies do routinely charge an extra fee for their temporary shows. We work hard to make sure the entire Met remains affordably accessible to one and all. And we will increase that access even further starting July 1, when the Met will be open seven days a week—for the same suggested contribution."

As for the Groupon deal, it's unclear whether our readers would fall for that—about 86% of them pay $11 or less at the Met.