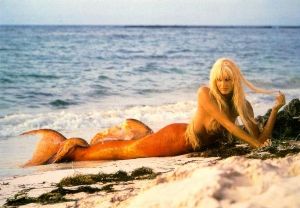 Reverend Billy and Savitri D have been named King Neptune and Queen Mermaid of the 2008 Coney Island Mermaid Parade, taking place this Saturday, and they're using their power to save Coney "from the gentrifying apocalypse of RETAIL ENTERTAINMENT HELL!" But as they say, No pain, No Gain -- and in order to help their cause, the Queen Mermaid has declared a hunger strike.

The Queen Mermaid will refuse to go back in the ocean! She will initiate a hunger strike during the parade, and will live in a window on Surf Ave and West 12th from the Mermaid Ball until the critical scoping meeting on June 24th at 6 pm. She is fasting to draw attention to a destructive scheme to reduce 60 acres of amusements to 9. She is fasting so YOU will come to this meeting, where the fate of Coney Island may be determined.

The meeting is next Tuesday at 6 p.m. at Lincoln High School [2800 Ocean Parkway]. You can visit the mermaid in person or keep an eye on her online here, starting 10 a.m. this Sunday.

The former "Mayor" of Coney Island, Dick Zigun, has a piece in the Daily News today regarding the threatening grasp the city has on area. He states, in part, that the city "presented a new plan with no hearings, no public input and not even an opportunity for directors of the CIDC to discuss it. The new plan would allow four hotel towers south of Surf Ave. in the amusement area, including one that would block the view of the landmarked Wonder Wheel from the subway." The plan is the focus of the hearing next week.

#coney island
#dick zigun
#hunger strike
#mermaid
#mermaid parade
#savitri d
Do you know the scoop? Comment below or Send us a Tip