Here's some cuddly news (with photos!) to briefly take your mind off the looming L train blues: The ASPCA has given us updates on some animals who were rescued from dangerous, sometimes disturbing situations, as well as some adorable photos that, warning, may compel you to go out and find your own pet to adopt.

Two years ago, the NYPD took over animal investigations from the ASPCA and the two groups entered into a partnership to combat animal abuse: The NYPD responds and investigates animal cruelty complaints while the ASPCA provides care for victims and offers forensic analysis and police training.

In 2015, the NYPD and ASPCA's joint efforts resulted 158 arrests and 677 animals treated, an 18% and 60% increase respectively over 2014. Howard Lawrence, Vice President, ASPCA Anti-Cruelty Group, said, "The first two years of the NYPD-ASPCA partnership shattered past records and yielded incredible results for the city’s most vulnerable animals... The combined dedication and compassion of NYPD officers and ASPCA staff saved hundreds of animals from suffering in New York City last year, but this progress relied on New Yorkers reporting animal cruelty and neglect."

Here are some of the happy tales (and tails) from the ASPCA: 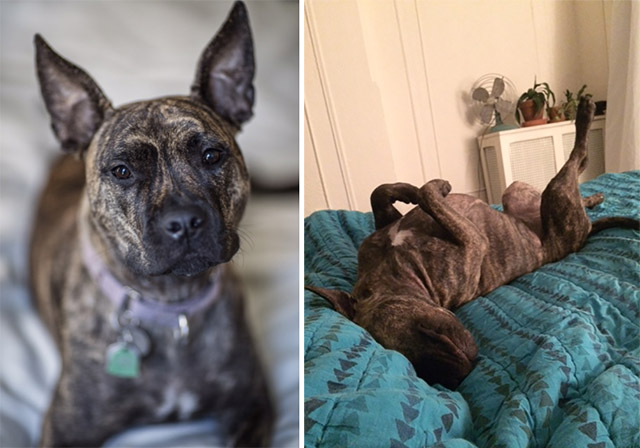 LOOK AT THIS FACE! (Courtesy of the ASPCA)

A year ago this month, a six-month-old puppy was found in the Bronx, buried in snow after being punched and beaten with a shovel. A 43-year-old man was arrested and the puppy was taken to the ASPCA for treatment. Now, the ASPCA says:

When ASPCA employee Dara R. and her boyfriend Benjamin M. brought Lacey into their Brooklyn home in March 2015, they only intended to foster the abused pup for a little while. Given Lacey’s extensive injuries, ASPCA medical staff felt an experienced foster home placement would be the best to determine if the female pit bull mix puppy could manage her physical limitations outside of a hospital. It didn’t take Dara and Benjamin very long to figure out this foster arrangement was destined to “fail”. In May 2015, they made the adoption official and renamed her Peanut Butter for her sweet and goofy demeanor and how her brown and tan brindle coat resembles a chocolate peanut butter cup.

Dara says, "She became a part of our lives so quickly. We just couldn’t imagine giving her back! She’s doing really, really well. Her adjustment was probably a lot smoother than anyone expected. She’s learned to get around in her own way and can compensate for some of the weakness she has from her past injuries. Her favorite thing to do is snuggle and she normally falls asleep on her back with all four legs in the air."

Peanut Butter is sociable with both humans and other dogs—and she loves to travel. Dara adds, "She just loves nature. We recently took her on a little hike near Asheville, North Carolina and let her put her paws in the ocean at the Rockaways last year."

A trio of seriously neglected Shih Tzus, which the authorities named Janet, Chrissy and Jack, was found in a Bronx drug den. The dogs' fur was so matted that they needed medical grooming.

Bill Cook, Chief Investigator for the Office of the Special Narcotics Prosecutor, saw the before and after photos of Junie and decided to adopt her. He and wife Maryann had recently lost their Shih Tzu of 17 years and were eager to bring a new dog into their Westchester home. According to the ASPCA, "Like most dogs, Junie enjoys stretching her legs with a good run around the family’s back yard with another dog or chasing after her favorite bacon-scented squeaky ball. But more than anything, she prefers curling up on a warm lap."

Junie and her "niece" Dobbie; Dobbie is the Cooks' daughter's dog (Courtesy of ASPCA)

"She's our little baby," Bill Cook said. "She wakes me up each morning and comes to sleep with us each night. Everyone just loves her. You couldn't ask for a sweeter dog." 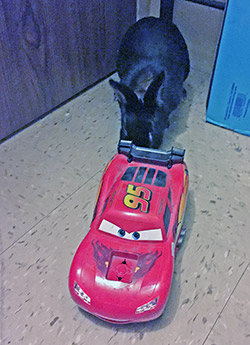 Remember the estimated 200 other bunnies living in squalid conditions behind a Gowanus tire shop? This one and 150 others were rescued and treated for various illnesses (including syphilis) at Ani-Care Animal Hospital in Pennsylvania.

Now Sebastian is healthy and back in Brooklyn, after being adopted by the Triumph family. The ASPCA reveals, "When Kelly Triumph’s husband saw the announcements for rabbit adoptions on December 12, 2015, he knew that this was the time to fulfill his wife’s long-time dream to own a bunny and get the family’s first pet. Sebastian David —as he was christened by Kelly’s young son—has been a spirited addition to the family."

Kelly Triumph was, as you can imagine, thrilled: "As soon as we saw Sebastian at the adoption event we knew he was the one. It was love at first sight! Sebastian is a very playful bunny. He hops around the house and plays with the children. He really enjoys pushing my son’s toy car on the floor. His favorite food of all is fresh broccoli. He also knows exactly how he likes things. If you move his water bowl from its usual spot, he’ll pick it up and put it where he’s used to it being."

Last January, an extremely malnourished pit bull puppy was found in a suitcase dumped near a trash can at a Bronx housing development. In a wonderful turn, he's living like a king in Queens these days.

The ASPCA says that the dog, which caregivers named Fraggle, "weighed only 30 pounds and could not walk or eat on his own for several weeks."

At times it was uncertain if the shy dog would even make it, but by May 2015 he was healthy enough to begin searching for his new home. Jobanny Estrella-Elmonis and her husband were looking for another special dog to help keep their older pit bull mix, Grace, company and fell in love with Fraggle’s sweet face. They knew he was meant to go home with them.

"When Fraggle greets me with a hug and looks up at me with this little smile that beams with pure love, I feel God’s love and blessing," Jobanny said. "I am honored to have the opportunity to love him and cannot imagine what kind of person it takes to do what was done to him. I believe there has to be a special place for people like that, because that was deliberate and took effort."

Renamed Prince Fraggle, he now weighs over 55 pounds and continues to adjust with help from Grace, who "accompanies him everywhere from the dog park to the groomer." And, yes, Grace and Prince Fraggle often snuggle in the same bed.

Lawrence, of the ASPCA Anti-Cruelty Group, praised concerned citizens who alert the authorities as well as those who adopt these survivors, "Not only are they speaking up on behalf of animals, but opening their homes to give victims like Fraggle, Janet, Sebastian and Lacey second chances they need and deserve."

#adoption
#aspca
#nypd
#pets
#rescue animals
Do you know the scoop? Comment below or Send us a Tip