For over five decades, Alex Carozza built and repaired musical instruments on the strip of West 48th Street off Times Square known as Music Row. The eponymous owner of Alex Musical Instruments, Carozza has gone by many nicknames — the Sultan of Squeezeboxes, the Master of Music Row, and the Horse-shitter (more on that later). He made guitars for Eric Clapton and George Benson, did business with Frank Sinatra and Tony Mottola, and earned a reputation as one of the premiere accordion technicians in the world.

But over the past few months, Carozza, who will turn 89 in August, has mostly served as a symbol of a bygone era, the token old guy in yet another narrative of a vanishing New York institution.

In December, Alex Musical Instruments vacated its three-story storefront on 165 48th Street, leaving the historic block without a single music store. The city’s musical mecca, where the Beatles bought drums for the Ed Sullivan Show, where Pete Townshend would stock up on Gibson guitars that he’d later smash, and where musicians of all stripes would venture for affordable gear, had collapsed under the forces of rising rent.

For those invested in the fate of Music Row, Alex’s departure was hardly surprising — Manny’s shut its doors for good in 2009, Sam Ash closed all five storefronts and moved to West 34th Street in in 2012, and Rudy’s absconded to SoHo last year. But the surrender of the last holdout made the death of Music Row official, and Alex Carozza, the weathered face of that demise. He played the role expected of him, lamenting the impersonal nature of online shopping for WFUV, telling the NY Post that “the time comes for everything,” and posing solemnly with an accordion for the NY Times’ eulogy of Music Row. 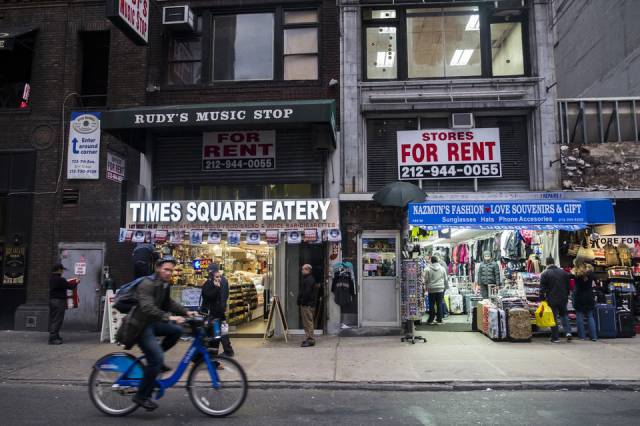 But while the street itself is dead, Alex’s accordion business is still very much alive — now just a few blocks north, on the sixth floor of an office building on West 54th Street. The space is considerably smaller than the 48th Street location, and the workshop spills out a bit from behind the counter onto the showroom floor. Alex, who left Italy in the 1930s and spent his childhood in Argentina, is speaking in Spanish with two customers when I arrive, both of whom have dropped off their accordions for a tune-up.

When the customers leave, I ask Alex how the transition is going. “I'm just renting here, temporary,” he says. “For now, it's alright. But end of the year, maybe next year, I will have my own place. Much better than this, because we are so close here.” He gestures at the work benches behind him, where two others are tinkering with accordions.

One is Juan Carlos, Alex’s understudy for more than two decades, and the man expected to take over the business if Alex ever retires. The other is Alex’s nephew, Enrique Gabriel, a filmmaker and writer who’s currently working on a biography of his uncle. 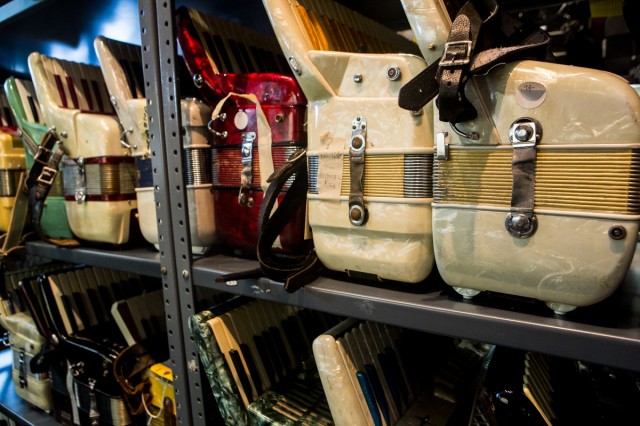 There was no choice but to move, Alex says, because the landlord planned to raise his rent 400 percent, up to $16,000/month. “I wasn’t too sad,” he adds. “Everyone else had already disappeared.”

Over the next hour, I do my best to pry some Music Row nostalgia from Alex — maybe a story about meeting Bob Dylan or a grand indictment of the city’s failure to preserve cultural spaces — but he seems uninterested in this line of questioning. Instead, he speaks hopefully about the accordion schools set to open in the Bronx and Brooklyn. He talks about his early days as a documentary filmmaker, a passion he gave up years ago but hopes to pursue again one day. He tells me about a favorite customer who lives in New Zealand and takes an annual trip to New York just to bring his $29,000 accordion to Alex Musical Instruments.

“They won’t let me retire,” he laughs. “They say, ‘Stay in business, please, Alex,’ because they don’t want anybody else.”

What memories I can gather from Alex seem to straddle the line between fact and fiction. He claims that he had over 20 employees and brought in $40 million a year during the heyday of the 1970s. A woman, a family friend who once served as the store’s bookkeeper but now just “helps out,” overhears this figure and disputes it. When I ask Alex how that compares to business now, he tells me “it’s about the same.”

This seems unlikely, but it feels impolite to press the jovial senior on his year-over-year revenue declines. In any case, I’m assured by the former-bookkeeper-turned-helper that Alex Musical Instruments is indeed still turning a profit.

Later, I’ll sit down with Alex’s nephew, Enrique Gabriel, who oversaw the move from 48th Street, helping Alex to clear out decades’ worth of memories. “I was much more sentimental than he was,” Enrique says. “I think he put a wall up, and it was very clever of him to do that.”

With Enrique’s help, I’m able to piece together a more coherent timeline of Carozza’s life: He started his first business as a schoolboy in Argentina, picking up horse manure and selling it to brick factories. In 1960, he came to the United States to work at Accordion-O-Rama (now based in New Jersey), then took a job on Music Row as a manager at Sam Ash. In 1969, he opened his own instrument repair shop on the second floor of 165 48th Street, where Rudy Pensa worked as a stockboy before opening Rudy’s Music Shop right next door.

Seven years later, Alex moved across the street to the largest storefront on Music Row, right next to Manny’s. Business was booming then, and Alex was able to buy the large building for “very cheap.” A few years later he rented the space to Sam Ash and moved back to the original location across the street, this time occupying three floors. In 2008, he sold the Sam Ash building to the Rockefeller Group for a reported $33 million. 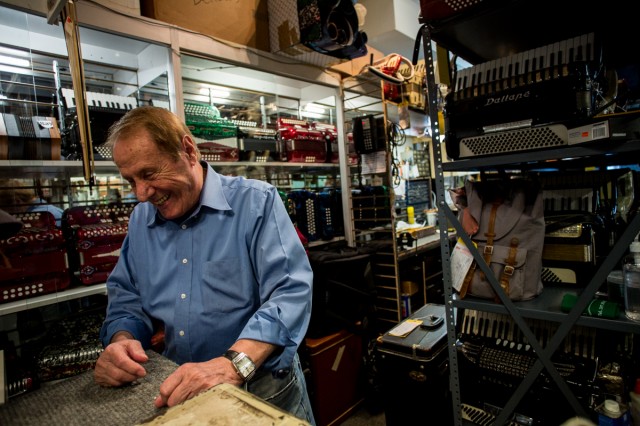 “I call him the horse-shitter,” Enrique says, laughing, “because he started selling horse shit and ended up making business with Rockefeller.” Enrique pauses then, mentally translating an excerpt of the book for me. “The main thing about Alex is that, yes he's a very talented musician, but his real essence is commerce. Making business, relating with people. All his life he is obsessed with progress, because he suffered a lot, he wanted to buy good things for the people he loved. For him, the important thing is to overcome the obstacles.”

After coffee, I walk along 48th Street. It’s just another midtown block now, bookended by parking garages and condos, with a Dunkin’ Donuts and Chipotle in the middle. The former locations of Alex Musical Instruments, Rudy’s Music Shop, and Manny’s are all empty, with ‘For Rent’ notices plastered on each window. On the south side of the street, a black sign advertising Manny’s remains as well, attached to a stopped-clock that seems all too fitting. It’s not hard to picture the street’s better days, to imagine a much younger Alex entertaining a packed shop.

But even if 48th Street does feel like a recently abandoned ghost town, it’s not as though the gears of the urban growth machine have stopped. Earlier this month, Hard Rock International announced plans to erect a flagship hotel on the block that, according to a press release, “will breathe new life into Music Row and recapture the legacy of this historic location.” So while you may not be able buy an instrument on 48th Street anymore, guests of the 445-room hotel will soon have access to “Fender guitar and DJ-equipment rental delivered in-room for impromptu jam sessions.”

When I call Alex to ask his thoughts on this, he says that he’s very busy, and will have to get back to me. He hasn’t yet, though I’d venture a guess that he’s not losing sleep over the news. For now, it’s just nice to know that this relic of Music Row has survived, and that Alex Carozza is still busy making progress. 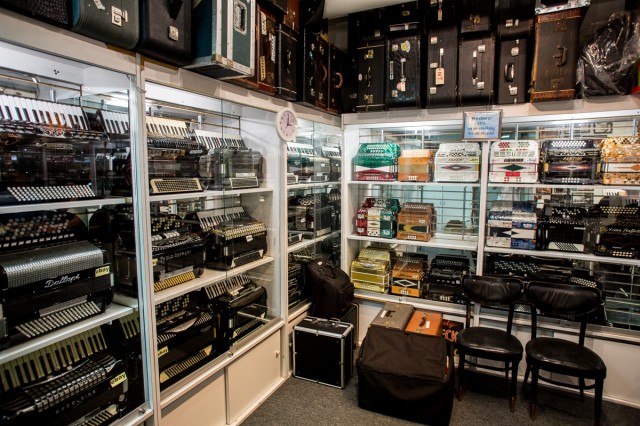 #alex carozza
#Alex Musical Instruments
#music row
#original
Do you know the scoop? Comment below or Send us a Tip