Meet the Mets, Rickroll the Mets 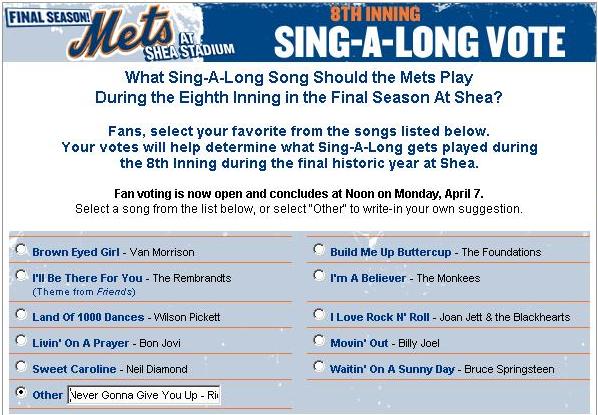 Thousands of Internet denizens--including some Mets--don't want to ever give Rick Astley up, so they are attempting to rickroll the Amazin's by writing in Astley's "Never Gonna Give You Up" as the 8th Inning Sing-A-Long song at Shea. 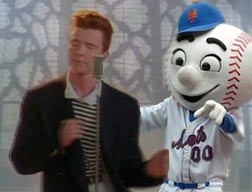 Seriously--over 8000 people have Dugg it! It's so funny, we can already imagine Mr. Met getting down, although one Mets fan turned visibly pale at the prospect. [Via reader Jason - thanks!]

The Mets have asked fans to vote on the 8th Inning Sing-A-Long Song (voting ends tomorrow, Monday at noon), and the choices are pretty lame, reflecting a family-friendly vibe that doesn't really befit trying to cheer a team into victory (really, the Friends theme song?). The two most rocking songs are Bon Jovi's Livin' on a Prayer and Joan Jett and the Blackhearts' I Love Rock N' Roll.

Cast your vote, whether by picking what the Mets suggest or writing in "Never Gonna Give You Up-Rick Astley" in the "Other" line. The home opener is on Tuesday, against the Phillies.

#mets
#ny mets
#rick astley
#rick roll
#shea stadium
Do you know the scoop? Comment below or Send us a Tip