In 1980, Tony Mangia, John Lesch and Gael Gibney began publishing their independent newspaper, called The Other Paper. They covered everything from community issues to the arts—anything that was happening East of Broadway and South of 14th Street. It was essentially a print edition of the hyperlocal blogs that would emerge decades later, like EV Grieve. During the year that the newspaper lasted, Mangia mostly slept in their office (a $200-a-month ground floor space on East 5th Street), and went for ride-a-longs with the local precinct, which had a Yankees-loving drug bust unit called The Baseball Team. He also saw the first signs of gentrification taking hold of the neighborhood, like that time the Gap opened in a $33,000/month storefront at St. Marks & 2nd Avenue.

Mangia also witnessed a considerable amount of concern come through his newspaper's office, which was open to the community—"The Other Paper office’s front door always seemed to be unlocked," he recalls, "and it wasn’t uncommon for some gray-haired hippie, a young performance artist or even a Hells Angel biker to come wandering in past midnight with a citizen’s concern, promotion or request. We were open to them all." 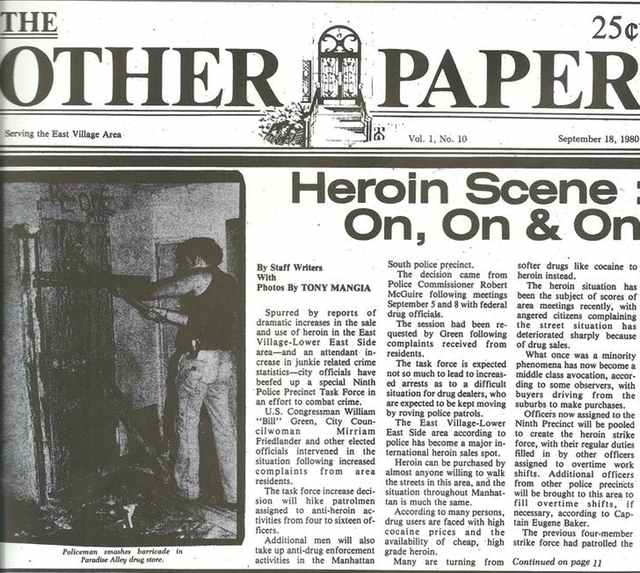 Now splitting his time between New York and Florida, Mangia keeps with him stacks of his coverage, including photos and old editions of his paper, and recently he found a stash of memories that he believed he had lost forever. He explains, "I came across these photographs which I thought had been destroyed in an attic fire at my mom’s years ago. And, after I found the handful of old prints in a box while I was cleaning out my apartment last year, good memories came rushing back.

"These photos represent the East Village I remember... [they] brought back memories of the abandoned tenements, drug raids and overdoses, the homeless on the Bowery, social change without social media, the myriad of faces you would see on the sidewalks and inside the dark dens of the Mudd Club, Danceteria, Max’s Kansas City and CBGBs—days when if you walked uptown past 14th street in a motorcycle jacket and a slightly spiked haircut, women would hold their pocketbooks tighter and street rappers would hold their boom boxes aloft and yell, 'Yo, punk rock!'" 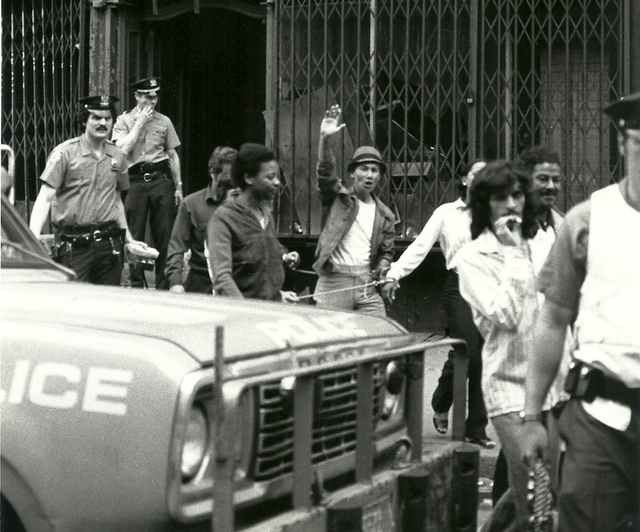 Tell me about The Other Paper. It was started by myself, John Lesch and Gael Gibney in 1980. We covered community issues and news along with the arts east of Broadway and south of 14th Street in a twice-monthly 16-page newspaper. We closed after struggling for ad revenue (there weren’t many stores with ad budgets) but outlasted many other papers like The East Village Eye.

One reason we opened The Other Paper in the East Village was to give the area a voice, where we trumpeted the issues and problems of the locals, while most NYC papers ignored them. There were many times one of our stories got picked up by the Daily News, the Village Voice or Soho News. We were proud of that.

When you think of the East Village back in the 1980s, what are your most prominent feelings about it? I loved the different personalities neighborhoods had back then. The East Village was always a place where struggling artists could find compatriots and affordable rents. Starting with the beatniks, then the hippies and when I was there the punkers, it was always had that artist community. Soho was already starting to become high end, but Greenwich Village was mostly gay and above 14th Street... we didn’t care.

What was everyday life like in that area back then, for you, as someone who was documenting the time and place? I was still a junior at St. John’s University and attended class there 3 mornings a week... [but] the newspaper was my life. I slept in the office. Since I had a “Police Blotter” column every issue, I become close to the Ninth Precinct cops and had access to the records room and did ride-alongs with the narcotics squad (known as the 'Baseball Team’ to dealers because they sometimes wore Yankees caps) so my time was spent with the police or trying to sell ads to the mom and pop stores. Crime centered around drugs. But drugs led to robberies and robberies to violence. Heroin overdoses in the street was a normal sight.

What were some of the first signals you saw of the area gentrifying in a way that wasn't going to reverse? When we first started, there was only one bank in the whole area. The first sign that change was brewing was when the city started auctioning off abandoned buildings and real estate agents started contacting us for information about street blocks. That’s when local families started coming to us to keep greedy landlords at bay. 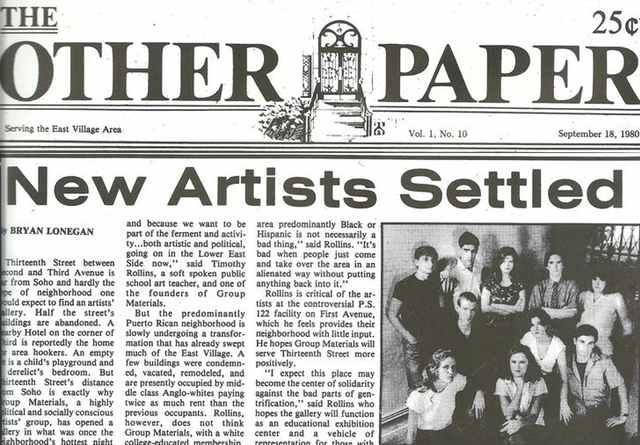 Do you prefer that era to now? I was a young man who could handle the streets a lot better than I could, or want to, now. The gritty neighborhood and the crime were all great sources for an idealistic photojournalist to hone his muckraking skills. I didn’t notice squalor as much because I was a part of it and saw it through a camera lens.

What do you miss the most about the 1980s East Village? I miss the quiet streets. You could always find a block that was totally empty, no bars, no people or even cars. And the night clubs. Every club had its niche. If you wanted punk, new wave or dance, there was place you could go that wasn’t besieged with tourists, posers or lookie-sees. We used to go to this one after-hours place called Club Zero. It was a guy’s living room with a plywood bar serving only Jack Daniels and cans of Bud. Saw my first “New Wave Comic” there—a guy named Dave Street. Then there were CBGBs, Mudd Club Max’s Kansas City and Danceteria. They’re all long gone.

#1980s
#east village
#flashback
#the other paper
#tony mangia
#longform
#original
Do you know the scoop? Comment below or Send us a Tip
A new Gothamist is coming! We’ve moved comments over to our beta site. Click here to join the conversation and get a preview of our new website.