Meet The Creator Of The Greatest 1980s Modular Clothing In the 1980s, my family often shopped at Caldor, a department store recognized by its yellow, orange and brown rainbow. They had everything from cassette tapes (it's where I purchased my first Debbie Gibson album) to appliances, snack foods, and clothing. For some reason, my most vivid memory is being in the clothing department with my mom, and asking her to buy me MULTIPLES.

MULTIPLES were a brand of modular clothing, sold folded up in plastic bags which would hang from a metal rod affixed in a pegboard. You purchased stretch pants, tunics, tube tops, dresses, skirts, and cloth belts—all offered in a variety of colors—and could create a number of outfits from the pieces. They were cool, comfortable, and totally '80s. A simple design, a stretchy canvas, perfect for a decade when hair was the undeniable centerpiece.

It's kind of odd they were so unique for the time, when looking back this style seemed so representative of the decade—an iconic 1980s uniform allowing for just a touch of the consumer's personality. (Personally, I would tie up my tunics in a shirt clip.) I got to wondering about this brand lately, and found out that it was all the brainchild of one woman: Sandra Garratt, long-credited for bringing a modular concept to the closet.

"We had a tag line," Garratt says, "Heightened individuality through apparent uniformity." She aimed to give the "highly creative individual" a nice canvas, and did not have any desire to create "clones walking in lockstep in identical uniforms without flexibility, or personal expression."

Garratt, who lives in Palm Springs now, recently told me about the origins of her most famous line—"I was thinking about it... it was in NYC when I really first made them. They came about in NYC after I conceived them in design school in L.A. I did my original modular-concept-collection as my final graduating design project from FIDM-LA fashion college in 1975, titled: BASELINE Modular Collection. I had been discovered by the wonderful Geraldine Stutz at Henri Bendel in NYC where I launched my first collection in 1978."

Garratt also credits her husband, Michael (who was working at Halston when the two met), with encouraging her to create her line. Garratt was stopping over in NYC on her way to London when the two met and fell in love. She ended up staying and getting a gig as fashion designer Zoran's assistant—he hired her for her concept-collection vision, one that would eventually become MULTIPLES. 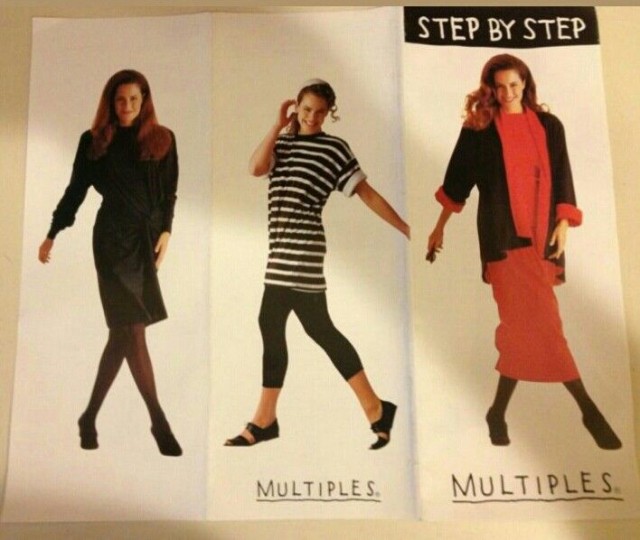 Garratt called her first collection UNITS, which launched in earnest in 1979 when she started Sandra Garratt Design, a sole proprietorship. But she had to change the name in the 1980s to MULTIPLES. "MULTIPLES started as a response to a nasty hostile takeover attempt of UNITS by JC Penney in 1985, calling themselves 'STINU CORP.' MULTIPLES launched independently of them as a sole proprietorship in 1986 after an ugly and costly litigation. I considered it to be stealing." Garratt continued:

[It was] greed. A nasty, unwanted hostile takeover of my sole proprietorship by the JC Penney Corp, which was clearly not a company that I had any desire to be associated with in any way. I created MULTIPLES once I was legally clear of them…they had tried to force a 'no compete' on me but that was deemed unconstitutional by the Judge after being tied up in court for months. For a while I was actually competing with my former company, sort of like a Star Trek episode, you know, which is the real Spock? I find it interesting that JCP never raised the sales one cent after their takeover. The customers want the real thing no matter what it’s called.

Aside from the name, Garratt didn't change anything else—"Both were pre-packaged concepts. Both were made from our mono-fabric of choice: a high quality USA-made 50/50% cotton/polyester Interlock knit. The patterns were identical, the identifiable construction remained the same with modular cut and construction, arm vents, zig-zag flat-felled seams, and 'one size fits most' sizing. [It was an] identical concept." While making the change, however, Garratt scaled back on options, telling me, "UNITS had nearly 50 style variations in 20 color choices with 150 freestanding stores in the USA, while MULTIPLES had 22 styles in 20 color choices in 1,200 free standing and licensed company run shops in the US."

With MULTIPLES, Garratt began an international print and TV advertising campaign, and while the top sales at UNITS capped around $150 million, MULTIPLES brought that number up to $500 million annually, with an additional $150 million from the Kids collection (even Sesame Street plugged them). She added activewear, menswear, and accessories to her catalog as well.

She was being spun as an overnight success story—in 1988, People magazine noted that in just two years, Garratt went from "cleaning kitchen floors and scrubbing toilet bowls for $5 an hour [to taking home a] projected $1 million in royalties as the designer of MULTIPLES, a line of mix-and-match clothing that is rattling the racks in about 600 stores across the country." They also expertly described why it was succeeding: "It's not just style, it's concept." (The NY Times was ON IT, too.) 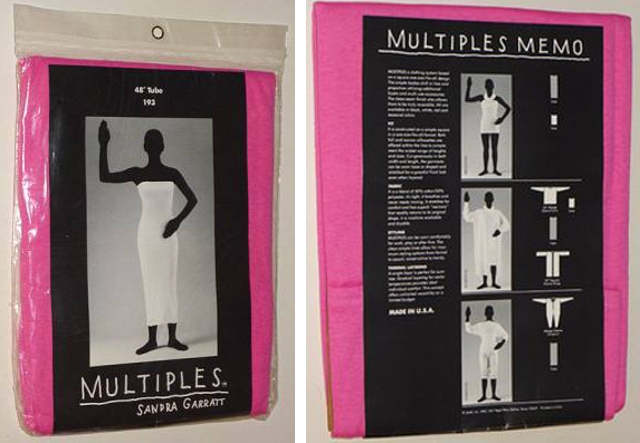 "Can you describe the clothing to someone who has never seen it — how did it work?" I asked Garratt, and it's almost as if she's in a pitch meeting describing it. "Very simple soft-colored cotton rectangular pieces in different sizes, like plain pieces of paper that you put together as you need or want. No hard fastenings, simple squared lines, no back or front (except for the pants), really very much like the children’s toy LEGOs, my favorite toy in the world." Aside from LEGOs, she likens her brand to having a Bauhaus inspiration, with a mix of another children's toy: Colorforms.

They were "simple clothes, for most people most of the time. For me it was work, play and after 5 p.m.….all the pieces had to work at any time. Depending on what pieces and colors were used, that made it all about creative personal choices for that person at that time. [They were] flexible applications for busy on-the-go women with active modern lives."

Before UNITS/MULTIPLES, there was nothing like it on the market. Garratt tells me, "I suppose the Muse was speaking to me... I had not seen a modular approach used in fashion, only in buildings and furniture design. I had seen lots of great mix & match separates, and at that time there was a great line out of L.A.: Harriet Welwyn’s FRAGMENTS, which was a small collection of nylon jersey knits in very new strange colors, cut on circle shapes, that all worked together. That idea I liked, and also the work of the young designer Julio on Lexington Avenue in NYC."

Garratt extended the "usability and easy care" of the line, along with its modular construction, to every aspect of the brand, "including promotional materials, images, packaging, and fixtures," she explains. She was ahead of her time, and adopted an approach that wouldn't allow any materials to be wasted. Her challenge was to "make something simple and basic and manufacturing-friendly with virtually no waste of the goods." Since styles and construction remained the same for her designs, there was "more efficient use of time."

Garratt has long fought to keep manufacturing in the U.S., telling me, "the Third World does not exist to be exploited as a cheap labor pool." She's been celebrated for her business model, and even honored at a reception at the U.N. Also the recipient of multiple VMSD awards for her packaging concepts and designs, Garratt has earned her pages in a recently published fashion history book from FIT professor Daniel Cole (she will also be a part of his followup that puts a spotlight on contemporary women designers).

Today, Garratt is still offering a version of her 1980s modular wear—with SGDBox, she's brought all of her endeavors under one umbrella. She explained: "SGDBOX is my overall store concept that holds all my various departments. MODBOX is my 'modern modulars for modern living' collection (aka UNITS and MULTIPLES)." Garratt has been a bit of pioneer in the eco-fashion world, and notes that "everything is the same [with her new designs] except I went totally organic in 1992, when it first became commercially viable to use USA grown and milled organic cotton." While she has an online outlet, she hasn't made a huge push in the commercial market with her latest offerings yet—"I think of it as my roadside stand. For now, no bells & whistles, but it’s all mine and it’s up and working."

At the end of 2015, Garratt signed a co-venture agreement with her former sales director George Goldstein, and the two are now "working to pull the company together with expanded production and a much-improved website." She says she is "amazed and gratified daily that so many of my long time customers track me down and patiently wait for their orders to arrive."

#fashion
#modular clothing
#multiples
#profile
#sandra garratt
#units
#original
Do you know the scoop? Comment below or Send us a Tip