Meet The City's Tree Vendors, Part 2: Getting the Job Done

It's the holiday season, and we sent writer John Kuhner out to investigate who's hawking Christmas trees to the city's residents. In this series of posts you'll meet some of the more intriguing vendors—everyone from that guy in the red Porsche... to that guy who hasn't showered in weeks. Previously: Part 1. 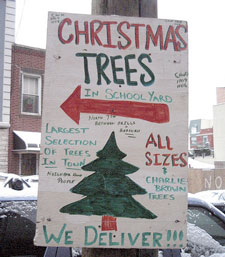 With a little observation, you can usually pick the Christmas tree sellers out of a NYC crowd: of course they tend to be a little bit dirty and badly shaved (makes sense if they’re living in a van with no shower). They are almost the only people dressed appropriately for the New York weather. They all wear toques, their thick winter hats (a word which has migrated into Canadian English, pronounced “tooks”). Their legs have the thickness of extra pant layers. “People think because we are Canadian”—and a large number of the treesellers are Canadian, mostly Quebecois—“we can take the cold,” says one Frenchman. “But it’s cold here. It’s cold, and it’s damp. And windy.”

They also manage to get their work done with a minimum of infrastructure. Most sellers will not only sell you a tree, but deliver it (tips are expected; many deliverymen work only for tips). Some just carry the trees on their shoulders, but others insist that the best way to move a tree in the city is in a supermarket shopping cart. Where do they get them? “We ask the bums. The homeless guys on the street—we just ask them how much they want for a shopping cart. They say like ‘five bucks.’ We say go get us one and they eventually come back with one. I don’t know where they come from, but we just leave them here when we go, so I guess they just go back into the system.” Most sellers also acquire whatever furniture they use—and sometimes the lumber for their sheds—from the streets. Being Canadians, they legally can’t work here, and so they bring almost no tools or equipment with them for fear of being rejected at the border (they travel separately from the trees as well).

They can also be ingenious in other ways. Many try to use every part of the tree, making carvings from trunk slices and wreaths from cut branches. An all-female stand, one of several in the city, last year sold tree needles in cute little satchels, as potpourri. Anything to make a buck and make the endless hours in the cold worth it. One man who ran a stand on the Upper West Side said, “I don’t do too many deliveries. I have guys who deliver the trees. A few times I’ve done deliveries, when everyone else is busy, or at the end of my shift. I’ll get like five bucks. Not worth the time. Some of the guys I have, they’ll get like thirty or forty bucks for one delivery! They tell me I have to work it more—you know, sing Christmas carols as I’m setting up the tree, say ‘ho ho ho’ and all that. I guess people like that. The guys sure liked counting the money afterwards, I’ll say that.”