It's the holiday season, and we sent writer John Kuhner out to investigate who's hawking Christmas trees to the city's residents. In this series of posts you'll meet some of the more intriguing vendors—everyone from that guy in the red Porsche... to that guy who hasn't showered in weeks. 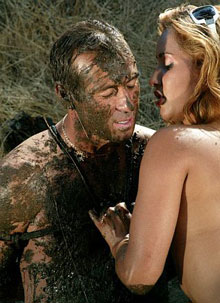 Technically speaking, New York City’s homeless population experiences a slight bump every December, when the Christmas tree sellers come to town. That van or capped pickup you see behind the stand? That’s a bedroom, used by the two- or three-person crew in shifts. They each work twelve to fifteen hours on the street in the winter and rough weather—“it’s really pretty bad when it’s raining, there’s no denying it, and believe it or not, there are always people who buy their trees when it’s raining”—and then crawl into their vehicles and collapse. They block the windows to keep it dark, but the noise is always a problem, especially for the sellers with the best locations—on Broadway, say. “You feel like you’re just laying down in the middle of the street. You can smell the exhaust too, when the traffic’s bad.”

Living in a van for a month means a vacation from plumbing. The crews find some way to solve the problem—usually an agreement with a local vendor (often involving a free tree). But there are problems in the boroughs: most of the stands have a night shift to protect the merchandise, but often all the nearby stores are closed in the middle of the night. One Ridgewood vendor said to me, “We have a five-hour block when nothing’s open. It’s hard. I just have to hold it.”

Showering is another problem. Some get gym memberships for the month. “The YMCA, they give us a special deal,” one female seller said. “A hundred bucks. It’s not nothing, but it’s worth it, you know?” Some develop relationships with locals who let them use their showers. “I have three sets of keys from people who have said I can use their place any time,” says one old-timer. Quite a number of them have this arrangement. “Someone came down from the building over there. He brought us tea and said we could come over whenever - just ring.” Other sellers were counting on this to happen to them but had found nothing. “No, I haven’t showered since I got here a week ago,” one admitted. “And I’ve been, you know, working, hard!”—here he indicated his odoriferous armpits—“all that time.” He looked fairly despondent. “I’m still hoping someone will offer.”

So if your treeseller seems a bit dirty or down, offer them a shower! It could be just the thing to get you onto Santa’s good list. But watch out when you invite these rugged types in, because who knows what can happen. “Three years ago a girl offered me a shower,” one rugged Canadian told me. “Ends up I didn’t have to sleep in the van again the whole month. That was nice. I wouldn’t mind if that happened again.”