"Look at this," says Lawrence Quigley, pointing to a photograph on the wall of his Brooklyn apartment. "The composition, the symmetry—that's just a beautiful photograph."

The photo in question is actually part of a paired exposure. The two images each show a young man in period attire from at least a century ago—one shot showing him in profile, the other facing the camera. On the back of the photo we learn that this is one Peter M. Vivancos, a 5'6" Cuban student who was arrested in New York on April 4, 1907, on charges of being a "furnished room thief."

The photos of Vivancos are among more than 100 old police mug shots that Quigley, a soft-spoken artist and web developer who lives in Prospect Heights, has collected over the past 20 years. Some, like Vivancos's, are from the NYPD, but many others are from various police departments across the country. Quigley displays them on the wall just inside the door to his apartment, forming a literal rogues' gallery of faces that greets his visitors. 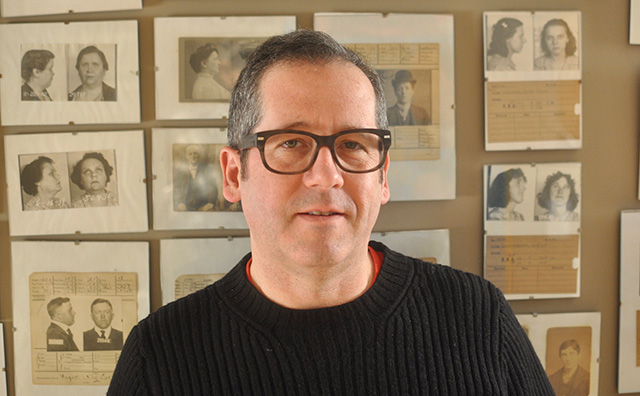 Quigley isn't a professional curator or gallerist. His mug shots form one of the many unusual collections that New Yorkers, with their offbeat sensibilities and obsessions, keep in their homes. And since many of those homes are small and cramped, the collections are often of small items, displayed in creative ways. Taken together, these collections form a sort of composite museum hiding behind our neighbors' doorways.

Mug shots, with their ready-made sense of film noir-style spectacle and visages of people who are, shall we say, not having such a great day, are an evocative collecting category. The author Mark Michaelson, writing in his 2006 book, Least Wanted: A Century of American Mugshots, seemed to revel in the seediness of it all, referring to vintage mug shots as "central casting for the late-late-show of unvarnished reality."

Quigley isn't immune to the lure of the sordid, but his interest in mug shots is less voyeuristic than aesthetic. "I'm interested in photography, especially good photography that's out of context, so the image matters to me more than the arrest details," he says. "And then on top of that, you have a slice of history. That's what these photos are." He points to another pair of shots, this time of a somewhat haggard but nonetheless bright-eyed woman named Evelyn Richardson, who was arrested in 1948. "This is just a great photograph. Imagine it blown up to, like, four feet by four feet—it's almost Avedon-esque, or Chuck Close. It's that good."

Evelyn Richardson's mug shot doesn't indicate what she was arrested for, but most of Quigley's photos do. The alleged infractions range from the mundane ("larceny"; "shop lifter"; "stole a case of quarts of syrup") to the lurid ("molesting girls"; "fagworker"—"That means a gay male prostitute," says Quigley). There's also a woman who was arrested for being an "abortionist"—a reminder that reproductive rights were a battleground long before Roe v. Wade. But of course none of these people had yet stood trial or been convicted, and Quigley repeatedly notes that he doesn't "make any assumptions about guilt or innocence."

Quigley, who says he's never been arrested himself, bought his first mug shots, a pair of 1907 images of a guy named Morris Bueroff ("P.P." — presumably short for pickpocket), at a Manhattan flea market in the late 1990s and soon found himself hooked. Over the ensuing two decades he's acquired about 130 more of them, mostly at flea markets and on eBay, never paying more than $35.

He tends to collect older specimens, so the arrestees are almost certainly deceased by now. Has he considered researching what happened to them, or contacting their descendants? "I'm curious, of course," he admits. "But it's a segment of their lives that they may not want to relive, so I haven't tracked anyone down. Also, I don't like to break the fourth wall."

For some collectors, you can draw a straight line between their interests and what they like to collect—the cinema buff who collects vintage movie posters, for example, or the seamstress who collects buttons. But Quigley isn't particularly interested in pulp novels or police work, and there's plenty of non-mug shot vintage photography out there, so how did he end up with this collecting niche?

A clue comes from one of Quigley's artistic habits: He keeps his hand and eye sharp by sketching people's faces while riding the subway. "Musicians do scales," he says. "I do this." He flips through one of the dozens of sketchbooks he's saved over the years, revealing an endless variety of New Yorkers from the shoulders up. How long has he been doing this? "More than 20 years," he says. Since before he started collecting the mug shots? "Yes, but not by much."

And suddenly it all makes sense. "I guess you could say I acquire faces," Quigley says. It turns out he's a bit of a facial specialist. One of his art projects involves painting portraits of regional salesmen onto nickels. Even at life-drawing classes, which he attends regularly to hone his chops, he tends to focus on the faces, not the figures.

Still, why mug shots? "It's true, I could have collected antique photographs of, say, weddings," he says. "But that's almost too codified. The mug shots are people who were yanked off the street, so they're less posed, less staged. Some are giggling, some look grim. There's an emotional topography to it that I like."

Some collectors never lose the itch—they have that compulsion to keep acquiring. Does Quigley feel that way?

"Not exactly," he says. "It's not so much that I must always be collecting. But sometimes I'll see an image and think, 'I must have that one.'"

Are you a New Yorker with an interesting collection? If so, we'd like to hear from you. Contact Collection Agency here.

#brooklyn
#mug shots
#photography
#longform
#original
Do you know the scoop? Comment below or Send us a Tip
A new Gothamist is coming! We’ve moved comments over to our beta site. Click here to join the conversation and get a preview of our new website.