It's two o'clock on a Saturday afternoon in June, four hours before the first pitch, and five Beach Bums are already lounging around their windowless, concrete dressing room at MCU Park in Coney Island, heating up straightening irons and pinching fake eyelashes. A rolling rack of bright-red sequin dresses is pushed against the back wall, next to a cardboard box full of silver pom poms.

One of the Bums turned 21 yesterday, and her purple birthday cake is still sitting out on a folding table, only one slice eaten. The room smells like hairspray. "Next to the beach, with the humidity, you got to work with it," says 23-year-old Arielle Ortiz from Yonkers, coach of the 2015 Bums. "As soon as you step outside your hair starts to curl in all the wrong places."

The Brooklyn Cyclones, the Mets' single-A minor league team, are about to wrap up a six-night homestand. It's been a long week. "If the game goes into extra innings, which happens a lot, we don't leave until everyone leaves," Ortiz says.

Last week's 2-1 win over the Tri-City ValleyCats lasted almost five hours. "It went 12 innings, until 11:30," Ortiz recalled. "Then we had to say goodbye to the fans, and go out to the gates to hand out schedules. We had rehearsal the next morning at 10 a.m. It was draining." 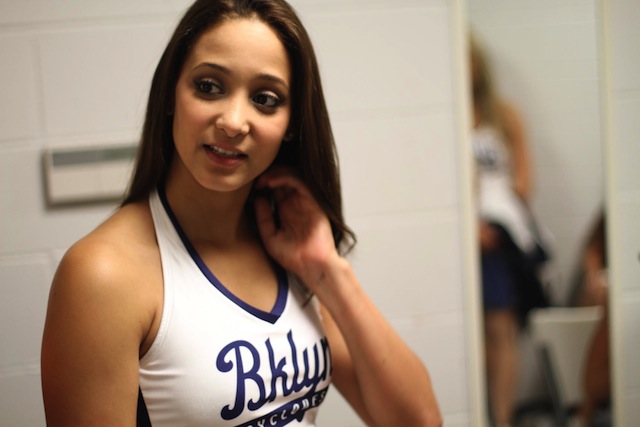 This summer's 12-woman dance team is mostly rookies, and many of them are from South Brooklyn— Bensonhurst; Marine Park; Gerritsen Beach. There are a few 18- and 19-year-olds, and one 30-year-old ("she doesn't look 30," Ortiz says). Everyone else is in their early 20s, including Jessie Ancona, who's going to be a senior at Brooklyn College in the fall, where she captains the cheerleading squad.

While the name "Beach Bums" suggests some kind of laid-back boardwalk lifestyle (it's actually a nod to "Dem Bums," an old nickname for the Brooklyn Dodgers) the team works hard: Six hours of rehearsal a week from April to September, plus up to six home games a week all summer, plus the hours spent handing out season schedules at businesses and street fairs around the borough.

Factor in a commute, and that's a big time commitment. Shannon Gordon, 19, a Bums rookie, lives in Queens. To get to MCU Park, "I take the 59 Bus to the G to the F," she said. "It takes, like, two hours. Sometimes two and a half." After the ValleyCats game, "I didn't get home until almost three in the morning." She shrugged and laughed. "I had a really bad train day."

"People see the girls [at the games], and they think they're just standing on a dugout and throwing t-shirts and dancing," said Billy Harner, the Cyclones' communications director, and the Bums' boss. "Fans don't realize that they've been working for eight, sometimes 10 hours already that day."

Before every game, the Bums go over choreography, then get dressed and touch up their makeup. Next, they split up for two hours to greet fans at the gates. They watch the entire game from the roof of the dugout, swaying and shoulder-popping to the stadium's Top 40 soundtrack. Between innings, they dance behind home plate for the t-shirt toss, corral kids onto the field for the water balloon home run derby, and perform one choreographed number, in the middle of the infield. Their signature move is a step-touch-snap that sounds basic but would look pretty sad without I-was-born-with-it sass.

To be a Bum is to hype a baseball team at the very bottom of the MLB ladder. The Cyclones are unknown draftees in their teens and early 20s. They come and go. "We are are not like the Mets, where we have Matt Harvey," said Harner. "We don't really know who our players are going to be until they show up." Unlike the Cyclones, Bums tend to stick around, often for years. "We love having continuity, because the fans get to know them," Harner said.

Then every five years or so, there's a season like this one. "Which is good, because we need to start the crop over again," said Harner. 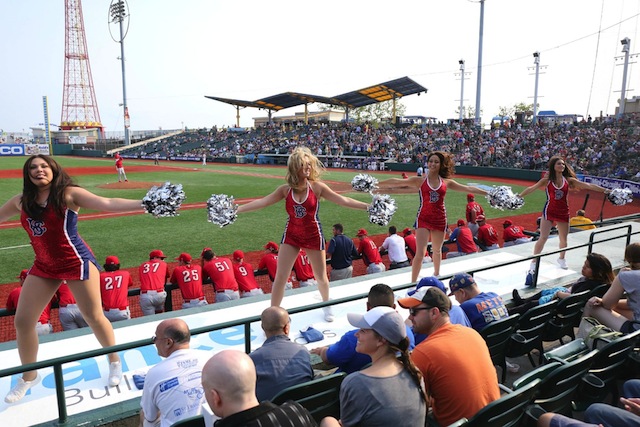 Depending on seniority, Beach Bums get a flat per-game rate between $65 and $80, plus a free meal. Community outreach, like riding a float in the Coney Island Mermaid Parade, is paid hourly ("a few dollars above minimum wage," according to Harner, who declined to share the exact amount), but mandatory rehearsals—two hours on Fridays and three on Sundays at Danceworks Studio in Dyker Heights—are uncompensated.

Marisa Finzanno isn't complaining. She's 18, and starting at Brooklyn College in the fall. Her mom drives her to and from rehearsals and games. For her, it's a dream job. "All of my friends are working at a supermarket," she said. "This is fun. I actually get to perform."

Harner says that many of the dancers quit after college to take "real jobs." But a few of the older Bums told us that this job is as real as it gets—it's one of several seasonal and part-time gigs that define their working lives.

For example, Gordon, who commutes from Queens, juggles the Bums with school and a second job. She's studying to be a neonatal nurse at Queensborough Community College and working at Love Culture, a fast-fashion chain at the Queens Center Mall.

And Laura Stecher, who's 26, supports herself entirely by performing. A German citizen, she moved to Washington Heights three years ago on an artist's visa to study at the Joffrey Ballet School. When she’s not at the ballpark, she works Bar Mitzvahs and music festivals, like New York's annual Electric Daisy Carnival. Being on the Bums "is actually a good gig, because it's on such a regular basis," she said. "It saved my summer this year."

Some Bums, like the ballplayers, dream of making it to the big leagues. But in the seven-year history of the team, only four women have done it. Two joined the New York Jets' Flight Crew, one dances for the Miami Marlins Energy Team, and fourth is a member of the Gotham City Cheerleaders, who perform, unofficially, for Giants fans in the parking lot at MetLife Stadium. Even for team dancers at the highest professional level, work is seasonal and pay is low. A state bill, currently pending, would require professional sports teams to pay their dancers and cheerleaders minimum wage. 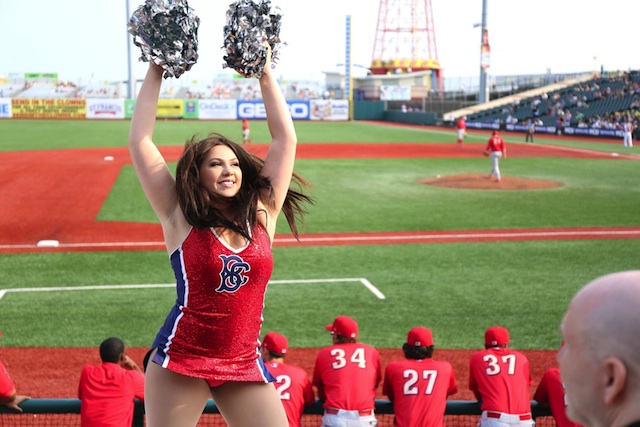 The afternoon we watched the Bums' pre-game practice, they rehearsed a dance set to "Time Of Our Lives," by Ne-Yo and Pitbull. It was pouring rain outside—ultimately the game would be canceled—but they worked the routine three times anyway, spending extra time on their leg lifts.

Afterwards, we talked to Angelique Garcia, a straight-talking 30-year-old Bums rookie who commutes from Staten Island. She works part-time as a community-inclusion specialist for adults with intellectual disabilities—taking clients out to dinner, to the movies, and to get their nails done.

#Beach Bums
#brooklyn
#brooklyn cyclones
#cheerleaders
#coney island
#Dance Team
#original
Do you know the scoop? Comment below or Send us a Tip
A new Gothamist is coming! We’ve moved comments over to our beta site. Click here to join the conversation and get a preview of our new website.