Meet Rochelle Ballantyne, One Of The Chess Experts In Brooklyn Castle

Last Tuesday night we found ourselves in a small room with about 35 other people at the SoHo House—there was an open bar, a table filled with the finest cheeses, and Jon Hamm was sitting down to play some chess with teenagers that would undoubtedly beat him game after game. We had all just watched Brooklyn Castle in one of the screening rooms, thanks to Hamm and Jennifer Westfeldt, who decided to host the little shindig after they saw the documentary. They are not, as they mentioned that night, "social media people"... so without Facebook or Twitter, this is how they decided to help spread the word.

The couple introduced the film, with Hamm noting that his love of it comes partially from his former career as a teacher. But even those who have never stood in front of a blackboard will be enamored with the documentary. Brooklyn Castle gives you a look inside I.S. 318 as well as the world of chess, all through the eyes of the school's team. You will witness their journey—as a team and as individuals—to become champions, masters, and grandmasters of the game, but you'll also see from inside of the school what battling a dwindling budget is like.

The documentary opens tomorrow at the Landmark Sunshine and Lincoln Center's Elinor Bunin Theater, and the film's stars will be holding court across from the Sunshine for their own little ChessFest—be sure to drop by (details here). Below, meet Rochelle Ballantyne, one of film's stars, and well on her way to becoming the first African-American female grandmaster in the history of chess. (Tomorrow we'll have another interview, with the documentary's director Katie Dellamaggiore.)

What has changed in your life since you were filming this documentary? Nothing really has changed since the film except my age, haha. School still comes first but I'm more committed to chess since I entered high school. I want to achieve my goal so bad and one thing Brooklyn Castle depicts is that if you work hard and you're devoted then anything is possible.

When did you start playing chess, and what got you interested? I started playing chess in the third grade when my grandmother first introduced me to the game. I'm very competitive so I think that's what attracted me more to chess, and of course traveling across the country was definitely a perk.

Do you have a favorite place in NYC to play chess? I love playing chess in general. I can't really pick a specific place because you get the same thing out of every tournament, I guess it just depends on my performance. 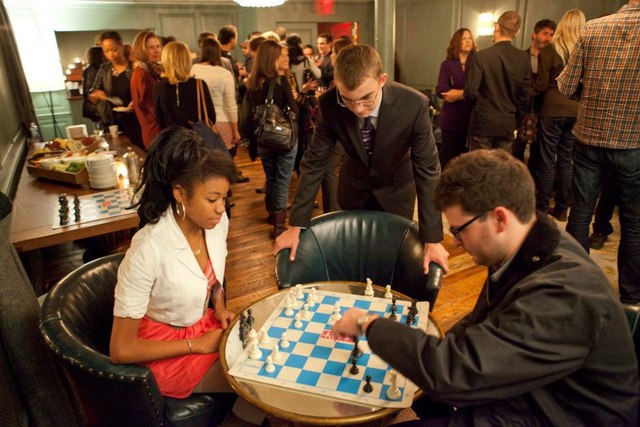 Ballantyne plays Eli Bush as Patrick, another star of the film, looks on at the SoHo House (via Brooklyn Castle)

Have you been enjoying the attention the film, and your story, has been getting? I'm not really the kind of girl that enjoys the spotlight, I have stage fright... BUT I do love the movie and I'm really happy Katie was able to depict such inspirational stories on camera. It's motivational and the more people that see it the more help schools across the country can help get funded. It's important that kids get the opportunity to accomplish all that me, Pobo, Alexis, Justus and Patrick have accomplished. So watch the movie, help these schools, we're the children of the future—no one deserves the money more than these kids.

What's next for you? Hmm, what's next for me? College, naturally. Hopefully I've broken master level by that time. Those are the things I'm sure of.

#brooklyn castle
#documentary
#interview
#Rochelle Ballantyne
#original
Do you know the scoop? Comment below or Send us a Tip