Meet Moondog, The Most Recognizable Street Artist From NYC's Past

Do you know of Moondog?

This Kickstarter campaign, which aims to fund a full-length doc on him—called The Viking of Sixth Avenue, will help introduce you... or reintroduce you.

Director Holly Elson explains, "For over 30 years, one of the most sought out, recognizable figures on the streets of New York City was Louis Thomas Hardin [aka Moondog]. He stood day and night, year after year, on the corner of 6th Avenue and 54th Street" playing his instruments, selling poetry, writing music. He became a legend, both in and out of New York. This full length documentary aims to tell his story, finally, and will include contributions from the likes of Jarvis Cocker, John Zorn, Chris Stein and Debbie Harry, Damon Albarn, Philip Glass and many more. Check it out in the above preview. The Kickstarter has five days left, and you can help support it right here. 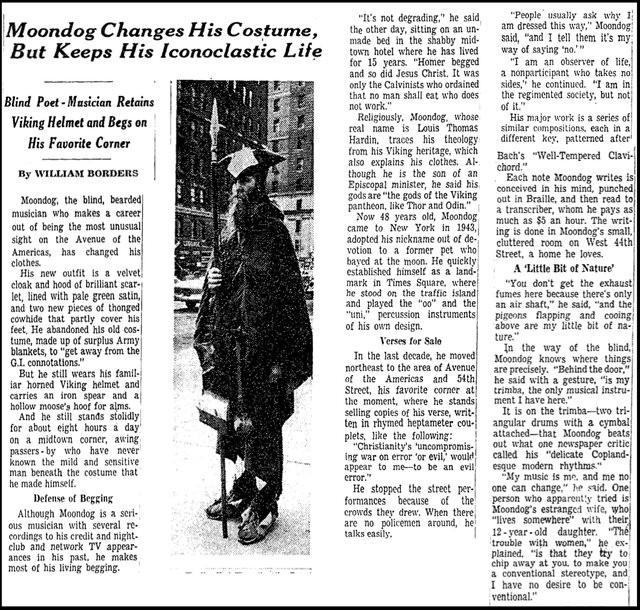 Even the NY Times reported on his doings, like the above article from 1965 when he changed his outfit. They also noted (in 2007, eight years after his death) that "from the late 1940s to the early ’70s Moondog was as recognizable in the New York City landscape as the Empire State Building, and nearly as striking."

#kickstarter
#Louis Thomas Hardin
#moondog
#The Viking of Sixth Avenue
Do you know the scoop? Comment below or Send us a Tip