After more than 14 years at 52 Prince Street, beloved downtown Manhattan bookstore McNally Jackson is leaving its original home. But don't worry, they're not closing down permanently—just moving to a new location.

"McNally Jackson is moving at the end of June," founder Sarah McNally told Gothamist. "I will be able to make a formal announcement on our new location soon, but I can promise that it will be nearby. I wish our current landlord had waited just another few weeks before pasting up that sign! He didn’t ask me, it just appeared. He’s very excited to get it to market."

Guys! We haven’t found the perfect new spot yet (we’re working on it), but fear not — we are definitely staying in the neighborhood. https://t.co/3iLGgJuLba

Bowery Boogie broke the news this morning after a tipster spotted Winick leasing banners that were affixed to the facade of 50 Prince Street. According to their listing, the 5,700 square-foot space will be available for "July 2019 possession." 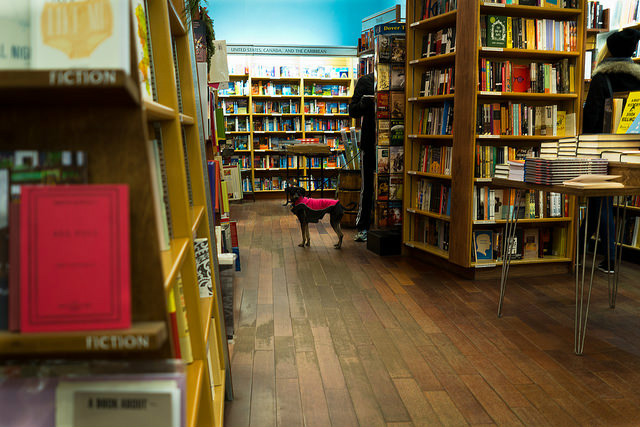 The bookstore was opened in 2004 by Sarah McNally, as part of her family’s McNally Robinson chain, then went independent four years later. Over the years, it has added a cafe and in-house printing press, becoming a sublime destination for thumbing through rarefied art magazines or attending a reading while sipping a latte. It also opened up a new location in Williamsburg this past January.

McNally took the store's transition as a chance to reflect on the importance of having independent bookstores, telling us this morning:

This whole process has made me think about the soul of McNally Jackson. Something is always lost in translation, but the translator chooses what remains. What about McNally Jackson is irreducible? It’s certainly not the current space, which is in a shoddy building that was thrown up over a former chicken abattoir. The soul of McNally Jackson is the books and the booksellers. We have remained devoted to an old fashioned idea of bookselling, in which bookstores are edifying spaces. While so many bookstores have cut back on inventory, we’ve gone deeper. I have tried to make a bookstore that is generous at every level. It’s generous if you would like to educate yourself in Arabic poetry, generous if you would like to read about the theoretical and practical implications of AI, and generous if you would like to buy a bestselling novel. We have always prioritized our mission to be a hub of global literary culture, with 14,000 books in our literature section alone, divided by geography. I don’t know a better retail resource for international literature, anywhere in the world. This we will keep, and translate into a new space.

McNally promises that they will have more news to share soon, and that they had put a nest egg aside in anticipation of this day. But the precariousness of maintaining independent bookstores in the city still seems nerve-wracking. Maybe someone can forward this article to former NYC tourism ambassador and McNally's fan Taylor Swift and she can swoop in and help out in some way. Hey, if one Instagram post can get over 65K people to register to vote in 24 hours, surely she could singlehandedly ensure McNally never goes away, right?

#books
#bookstore
#mcnally jackson
#nolita
#prince street
#reading
#soho
#original
Do you know the scoop? Comment below or Send us a Tip