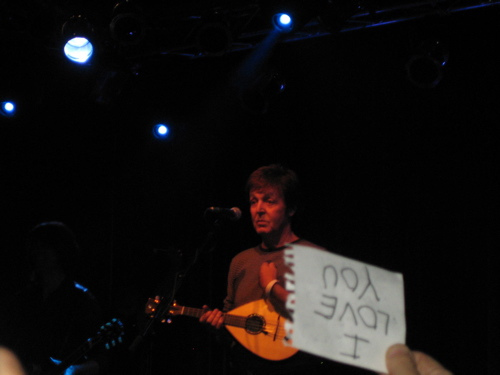 It isn't very often a Beatle takes a small stage for an intimate show in New York. Last night, this very thing happened...and lucky for those in attendance, that Beatle wasn't Ringo.

Paul McCartney played to a crowd of about 700 fans, press folk and a few celebs (Elijah Wood and Whoopi Goldberg) at the Highline Ballroom. While Macca was there promoting his new album, Memory Almost Full, his set list was full of oldies and goodies. From Billboard:

Drive My Car, Only Mama Knows, Dance Tonight, C Moon, The Long and Winding Road, I'll Follow the Sun, Calico Skies, That Was Me, Blackbird, Here Today, Back in the U.S.S.R., Nod Your Head, House of Wax, I've Got a Feeling, Matchbox, Get Back, Hey Jude, Let It Be, Lady Madonna. I Saw Her Standing There.

Before performing "Here Today," originally written for John Lennon, he said "I'd like to dedicate it tonight to fallen heroes John, George (and) Linda." If you missed out, he'll be back on a full scale tour next year. In the meantime, check out this video for his new song "Dance Tonight," featuring Natalie Portman.

While we were told cameras weren't allowed, there are plenty of shots around the internet. The above via SethKallen's Flickr.