McCain Never a Loser When It Comes to Comedy 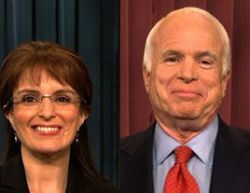 With less than 48 hours left before the election, John McCain stopping into Saturday Night Live to perform in a couple of sketches seems like it should be huge news. But with so much attention being showered on the show this year throughout the campaign season, somehow it just felt par for course at this point in a period that Tina Fey for one calls "the weirdest time in my life."

McCain, who has previously hosted and appeared on the show in seasons past, displayed the side of his personality that many found so endearing aboard the 2000 campaign's Straight Talk Express, being able to poke fun at himself and roll with the punches as well as most any politician across the aisle. During Weekend Update, he introduced several last minute strategies--including the "Sad Grandpa"--that would serve as his campaign's Hail Marys while trailing so significantly at this point.

Ben Affleck, no political ally of McCain's, hosted for the fourth time and appeared to be enjoying himself throughout. Nowhere was that more true than during his 9 minute send-up of Keith Olbermann's self-congratulatory air and inflammatory, knee-jerk reactions on Countdown.

Fey seems to be practically going through the motions in her attempt to hypnotize Americans with her Palin winks enough to lure them into becoming regular viewers of 30 Rock (which did score its highest ratings this past Thursday). But at this point, she's so in command of the character that a quick brush of her outfit as a nod to Palin's high-priced fashion spending spree was enough to be one of the highlights of the night.

After Monday night's two hour SNL election special, the show returns in two weeks with the promising combo of Paul Rudd hosting with Beyonce as musical guest. After the jump is Fey and McCain's opener, Affleck's Olbermann and a View sketch stolen by Fred Armisen as Joy Behar.