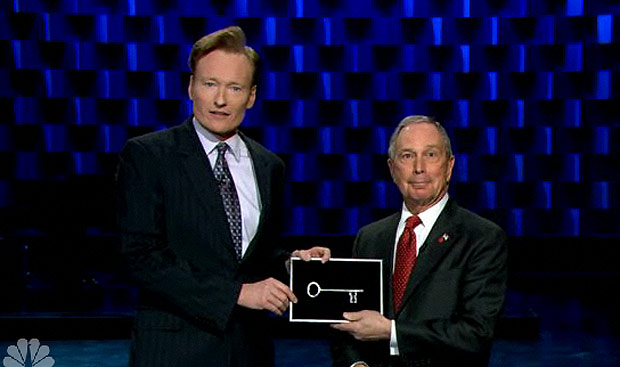 Conan O'Brien receive a key to somewhere from Mayor Bloomberg

During Late Night, Conan O'Brien reminisced about how much he loved New York (he will soon to depart to Los Angeles to take over the Tonight Show)—and as if on cue, Mayor Michael Bloomberg walked out to the strains of "New York, New York." He spoke about O'Brien's 16 years in NYC and presented a key, to which O'Brien exclaimed, "I'm floored. I'm stunned. I'm receiving a key to New York City."

However, Bloomberg said, "No, sorry, it's not a key to New York. It's the key to the Port Authority bus terminal's men's room. Hasta la Vista, baby." There's our up-for-reelection mayor, rocking the Spanish! You can see an edited clip below:

As for what Hulu/NBC edited, it was the part when Mayor Bloomberg exited the wrong way. It was a minor—but still amusing—moment and he quickly righted himself. We can't understand why it was taken out (maybe Bloomberg, one time 30 Rock guest, called Jack Donaghy to work his magic) but we have a screengrab of the walk wrong after the jump.