Mayor Mike Phones It In, Works on His Casual Look 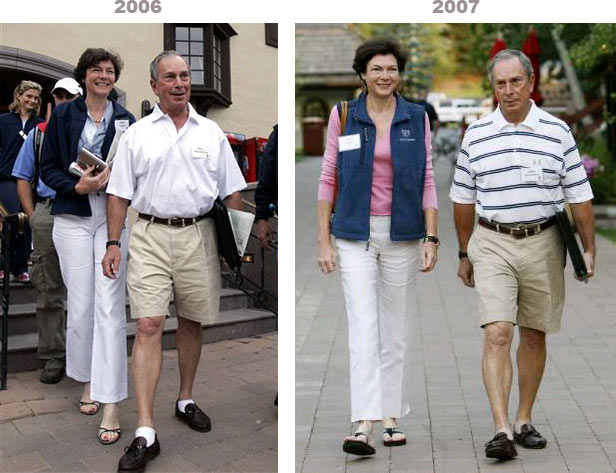 Still, Mayor Bloomberg has been going about his media mogul/mayoral duties - he participated in his weekly radio show (listen here) via phone. He explained the conference is a "good change to see some people who have a lot business in New York and I'm talk to lots of them on how well the city is doing and explain to them why they should keep expanding." He also said of Spitzer's remark, "I assume the governor was just joking, and it's all in good fun. People shouldn't be so sensitive. I'm certainly not." 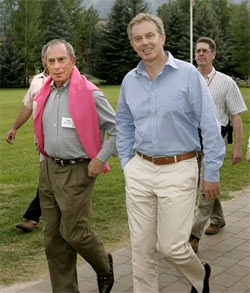 Yesterday, the NY Times noted the business casual look of many billionaires at the conference and included a close-up of Mayor Bloomberg's short-clad legs (he's far right - Harvey Weinstein is far left, Barry Diller is in the middle). Gah, but let's take the opportunity to examine the Mayor's sartorial decisions. Last year, he wore a white polo shirt, pleated shorts, and loafers with tiny little white socks - all in all, a summer fashion don't (Tim Gunn agreed, though we can't find the Daily News article where he said as much).

This year, he wore a striped polo, shorts without pleats and loafers sans socks. While we whole-heartedly approve of vetoing socks, Gothamist can't help but giggle as his sock tan line. And we were impressed he went with pleatless shorts, though he's still wearing pleated pants, as this photograph with Tony Blair (who is pleatless panted) from yesterday proves. Next year, Mayor B!

Oh, and Post reports that Spitzer backtracked on his snippy comment, saying, "Wherever the mayor is, he's on his cellphone, and we've been talking over the past couple of days. He has been obviously integral to every part of the conversations relating to congestion pricing . . . We couldn't be more thrilled about that relationship."