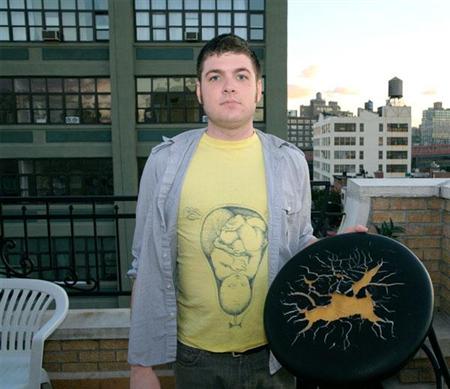 Max Silvestri can teach you how to use the internet, how to maximize your man style and, according to our research, about four other things. Each Thursday you can find him at Sound Fix for his Big Terrific comedy show (returning January 8th)—but he's also writing Top Chef recaps, hosting award shows, making videos for Details, entertaining Radiohead, and allegedly sitting in the basement of MoMA. He recently told us all about most of this.

What does 2009 have in store for Big Terrific? Gabe Liedman, Jenny Slate and I plan to keep putting on a fun and friendly show and inviting the funniest people we know to help us. But there will be a few changes. We're going to make the whole thing a little more professional, by doing stuff like testing the microphones *before* the show starts and trying to wear clean sweatpants. Also, we'll have some new drink specials: I cooked up something called the Eggy Mary, which is egg nog, super spicy Bloody Mary mix, and white wine. I say "cooked up" because it's served piping hot in a champagne flute. It'll cost one hundred dollars and even if we only sell 20, 30 a night, we'll be rich really soon.

You have a couple of Gabe's in your life, which one is your favorite? Gabriel Garcia Marquez and I just sold a Dark Knight parody video to CollegeHumor.com called Why So Magical Realist? I can't wait to get started on that never.

Which New Yorker would you say has the most man style? My old roommate Jesse Finkelstein, who runs a design company called JF and Son. The nicest clothes I own are things he was about to throw out for being too stupid. I am blatantly plugging him here so that he continues to hand me down his garbage sweaters.

What was your reaction when your video was linked to by Radiohead? I think of all of us were a bit awed at the idea that Radiohead had maybe sat around and laughed at that video in their studio. It was a pretty cool feeling. But then the flirty MySpace messages from the band turned from harmless to relentless and stalkerish. I literally just got a message from Colin Greenwood saying "wherez yr house i wanna meet your mouth" and it's like, enough, you know? We get it.

You've been recapping Top Chef every week for Eater, what do you think of the NY cheftestants? Who do you think will come out on top? I am a huge fan of Stefan and I think he has the best shot at winning. That being said, I *really* want Fabio to make it to the final three, because I wouldn't be able to stand the show without him. "If-a you want-a make a bootiful woman to be lover of da meataball, my-a grandmoother would snatcha da poof for to get the shame" Whatever you say, Fab.

Actually, my job at the museum is to decide which art we buy, so if you are a young artist, feel free to shoot me a Facebook message and I'll be happy to hook you up. JK, I work in the IT department, where I spend all day in the basement trying to stop the computers from destroying the art. (Robots hate beauty, FYI.)

Please share your strangest "only in New York" story. One time I took the train to an appointment then bought a hot dog outdoors. Only in New York!

Which New Yorker do you most admire? Subway hero Wesley Autrey should be mayor for life.

Given the opportunity, how would you change New York? I'd put a tax on chain restaurants and use the money to make cabs free. My political views are that I'm an extremely impractical arugula socialist.

Under what circumstance have you thought about leaving New York? I honestly don't understand people who don't live here.

Can you please recommend a good weekend hang-out that isn't unbearably mobbed? All of River Street just west of Kent Avenue in Williamsburg is really laid back. On a weekend night, you'll probably only find like three or four Hasidim in minivans having sex with prostitutes, so it's definitely got a chill vibe and enough room for you and your friends to have a drink and actually hear yourself talk.

Do you have a favorite New York celebrity sighting or encounter? I've seen a lot of celebrities here, but the first week I moved to New York I bumped into DJ Qualls in midtown. You may remember him from "Road Trip" or delivering the immortal line "You want me to hack the planet?" in "The Core." When I saw him, I was all "I've really arrived in the Big Apple, which is what everyone calls this place!"

Best cheap eat. I live right next to La Superior, so I eat fish tacos from there three of four times a week. They are so good and small! Sometimes I will walk in there when I'm not hungry and get a taco to go just because why not I'm a grownup I can have candy for dinner if I want.

What bands are you currently listening to? I am listening to the new Beach House and Kanye albums pretty constantly. "Hahaha / That was a good one / your first good one in a while." You are the best, Kanye.